The Cessna 172 single-engine aircraft was reported as stolen from an aviation school in Thunder Bay, Ontario in Canada, and departed without Navigation Canada authority, said Mike Kucharek, a NORAD spokesman.

Pilots attempted to notify the pilot to establish communications with local Federal Aviation Administration air traffic controllers and land safely for further follow-on action, according to a news release from the Wisconsin National Guard.

The Cessna pilot acknowledged the fighters, but was unresponsive to specific nonverbal commands, according to a NORAD press release.

The pilot was flying erratically and did not communicate with fighter pilots, Mr. Kucharek said.

U.S. Customs and Border Protection aircraft intercepted the Cessna as well, but the F-16s followed the aircraft until it landed in an area 23 miles northwest of Popular Bluff, Mo., at 9:45 p.m. EDT.

The Wisconsin fighters were about to hand the mission over to aircraft from the 159th Fighter Wing of the Louisiana Air National Guard when the Cessna ran out of gas over southern Missouri. The aircraft landed on Highway 60 near Ellsinore, Mo., and was apprehended by local authorities.

Brig. Gen. Don Dunbar, the adjutant general of the Wisconsin National Guard and the homeland security adviser to the state, ordered the evacuation of the Wisconsin Capitol building in Madison as a precautionary measure, according to a press release from the state. At 5:45 p.m., the evacuation was terminated based on the aircraft’s proximity to the capitol and workers were allowed to return to the building. 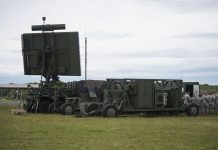 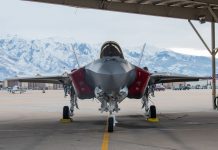 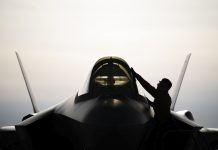