NATO has held its first war games focused on defending the Suwalki Gap, a land corridor critical to the security of its Baltic allies, officials said on Monday, amid tensions with Russia.

The narrow stretch of the Polish-Lithuanian border is sandwiched between Russia’s highly militarized Kaliningrad exclave and Belarus, a close Kremlin ally.

Military strategists warn it is the Achilles’ heel of Nato’s eastern flank: its capture would cut off the alliance’s three Baltic members — Estonia, Latvia and Lithuania — and so shatter its credibility. The gap, depending on the military analysis, varies from 60 to 100 kilometers.

Moscow has repeatedly denied any territorial ambitions and said a recent Nato build-up in the Baltic region on Russia’s border has upset the balance of power.

Lithuanian President Dalia Grybauskaite said on Monday the drills — focused on bringing allied forces across the Suwalki Gap from Poland into her country — sent a “strong message of Nato readiness and commitment to ensure security of the region”. “Facing threats, we are confident in ourselves, our allies and collective defence capabilities,” she said in a statement to AFP. 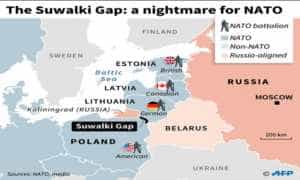 Fears that Russia could attempt an attack on the Suwalki Gap surged after Moscow’s 2014 annexation of Crimea from Ukraine, a move which sent East-West relations to their lowest point since the Cold War.

US Army Captain Jason Koontz, a spokesman for the multinational exercise told AFP on Monday, that formally called Iron Wolf, the “Suwalki exercises involved more than 1,500 service members from the US, Poland, Britain and Lithuania.”

Captain Donatas Suchockis, a spokesman for the Lithuanian military, told AFP that “the joint operation at this geographical location was held for the first time”.

The weekend manoeuvres were part of the annual US-led Sabre Strike drills in Poland and the three Baltic Nato partners.

Lithuania’s intelligence service has warned that Russia is capable of launching an attack on the Baltics with as little as 24 hours’ notice.

It also expects Moscow to simulate an armed conflict with Nato during its so-called “Zapad” (“West”) drills in Russia and Belarus in September.

Lithuanian Defence Minister Raimundas Karoblis warned this month that these Russian exercises may serve as cover for an aggressive troop buildup on Nato’s eastern flank.

Speaking on Monday in neighbouring Latvia, Nato Secretary General Jens Stoltenberg said the alliance was considering “calling on Russia to brief on the Zapad exercise” in the Nato-Russia Council.

Nato is deploying four battalions of about 1,000 soldiers in each of the Baltic states and Poland in response to

growing nervousness over the Kremlin’s intentions in the region that was under its thumb during the communist era.

US warns Russia of ‘catastrophic’ consequences of nuclear strike

The United States has warned Russia privately of "catastrophic" consequences if it uses nuclear weapons as part of the Ukraine...

North Korea on Wednesday denied it was providing arms to Russia, state media said, weeks after the United States said...

US warns Russia of ‘catastrophic’ consequences of nuclear strike