Autonomous vehicle technology may improve safety for US Army convoys

U.S. Army convoys could be made safer for soldiers by implementing autonomous vehicle technology to reduce the number of service members needed to operate the vehicles, according to a new study from the RAND Corporation.

“The Army is interested in autonomous technology because if they can reduce the number of soldiers needed to run a convoy, they can keep soldiers safe,” said Shawn McKay, lead author of the study and a senior engineer with RAND, a nonprofit research organization.

McKay and his colleagues examined three different autonomous vehicle concepts: the fully autonomous employment concept, where all the vehicles are unmanned; the partially unmanned employment concept, featuring a lead truck with soldiers followed by unmanned vehicles in a convoy; and minimally manned, a “bridging” concept featuring a soldier in the driver’s seat of each of the follower trucks to monitor the automated system and driving environment.

The technology to make an Army convoy fully autonomous doesn’t exist yet. McKay said part of the challenge for the Army is that current automated technology is still limited and has mainly been tested in settings with well-manicured infrastructure, including standardized road markings and signs. 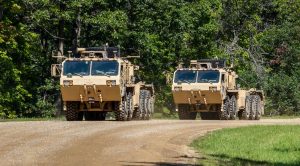 “We’re looking at a combat environment – it’s very complex,” McKay said. “An Army convoy could be operating in a Third World environment where road markings and road conditions are very poor, there’s open terrain, there’s herds of animals, and you’re under combat situations.”

“With current technology, human ‘operators’ are still required to monitor the driving environment and regain control when the autonomous systems are unable to handle the situation. When you have a convoy of several vehicles driving autonomously and one halts due to an obstacle the autonomous system cannot handle, you have a situation where the convoy becomes vulnerable. The bridging concept mitigates this risk while still reducing soldier risk.”

The study recommends the Army implement the minimally manned concept as a necessary bridging strategy to achieve the partially unmanned capability. The Army also should develop clear and practical technical requirements to reduce key development risks, such as from cyberattack.

Pressure to leverage automated trucks to reduce the number of soldiers at risk may build before the Army has worked out all the problems with these systems so the Army will need to prepare accurate assessments of system readiness and the risks associated with implementation before the Army is ready.

France will ship 12 more Caesar truck-mounted howitzers and fresh air defence equipment to Ukraine to bolster the fight against...