Speed is the New Stealth: Meet the SR-72

But those world records may not stay unbroken for long.

That’s because today, at the birthplace of the Blackbird – Lockheed Martin’s Skunk Works – engineers are developing a hypersonic aircraft that will go twice the speed of the SR-71. It’s called the SR-72.

Son of the Blackbird

The SR-71 was developed using 20th century technology. It was envisioned with slide rules and paper. It wasn’t managed by millions of lines of software code. And it wasn’t powered by computer chips. All that changes with the SR-72.

Envisioned as an unmanned aircraft, the SR-72 would fly at speeds up to Mach 6, or six times the speed of sound. At this speed, the aircraft would be so fast, an adversary would have no time to react or hide. 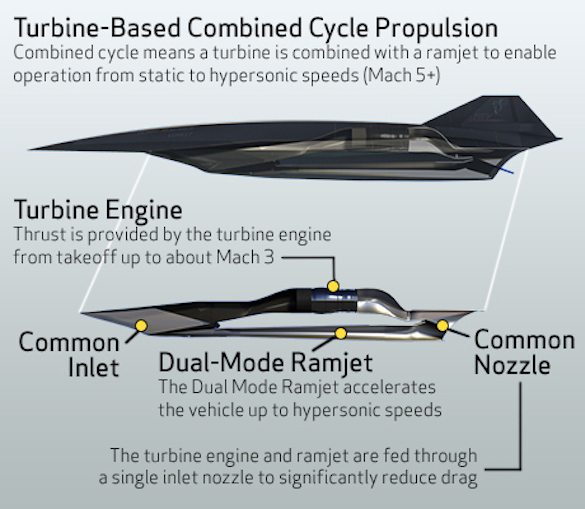 “Hypersonic aircraft, coupled with hypersonic missiles, could penetrate denied airspace and strike at nearly any location across a continent in less than an hour,” said Brad Leland, Lockheed Martin program manager, Hypersonics. “Speed is the next aviation advancement to counter emerging threats in the next several decades. The technology would be a game-changer in theater, similar to how stealth is changing the battlespace today.”

A hypersonic plane does not have to be an expensive, distant possibility. In fact, an SR-72 could be operational by 2030. For the past several years, Lockheed Martin Skunk Works has been working with Aerojet Rocketdyne to develop a method to integrate an off-the-shelf turbine with a supersonic combustion ramjet air breathing jet engine to power the aircraft from standstill to Mach 6. The result is the SR-72 that Aviation Week has dubbed “son of Blackbird,” and integrated engine and airframe that is optimized at the system level for high performance and affordability.

A hypersonic aircraft will be a game changer.

TYNDALL AIR FORCE BASE: Over the last year, Tyndall Air Force Base and the 325th Security Forces Squadron have been...

Eurofighter Typhoon Delivers a Further Boost to the UK Economy

BAE Systems has been awarded a £1.3bn order to support the production of 38 Eurofighter Typhoon aircraft for the German...

Eurofighter Typhoon Delivers a Further Boost to the UK Economy

Russia plans naval base in Sudan