The Singapore Armed Forces (SAF) has acquired a suite of protected vehicles for the motorized infantry forces. Called the Protected Combat Support Vehicle (PCSV), the new vehicles will provide our motorized infantry combat support and combat service support forces with improved firepower, protection and situational awareness to enhance their survivability. The PCSV will be commissioned by 2017.

The key features of the PCSV include:

Increased Payload
The protected vehicles can carry a payload of up to 4,000kg. This allows the PCSV to be configured to carry modular load such as mortar systems, battalion casualty stations and combat supplies for different combat support and combat service support functions.

Stronger Firepower
The protected vehicles are equipped with a 7.62mm Remote Machine Gun, which is operated from within the cabin, thereby protecting soldiers who are operating the weapon from exposure to hostile fires.

Better Protection
The vehicles have ballistic and mine protection features to protect soldiers and to fulfill operational requirements.

Enhanced Situational Awareness and Coordination
The onboard C4 (Command, Control, Communications and Computers) suite of systems allow rapid information exchange with all friendly forces, increasing command and control and survivability on the battlefield. The recently commissioned Army Battlefield Internet will allow the Protected Combat Support Vehicles and Terrex Infantry Carrier Vehicles to operate on a common network, enabling the SAF’s motorized infantry forces to fight together in an integrated manner.

Variants of the Belrex PCSV
With ten variants, the Belrex PCSV can be configured for a wide range of missions to provide close proximity support to the infantry forces. The ten variants are: (1) combat engineer, (2) fuel, (3) logistics, (4) maintenance, (5) medical, (6) mortar, (7) mortar ammunition carrier, (8) security, (9) signal, and (10) reconnaissance.

Each variant is customized with different features to fulfill the different roles, with seating capacities varying from four to ten (including vehicle commander and driver). For instance, the logistics variants are equipped with shelves to carry stores to resupply the combat forces and as a result, have smaller cabins to accommodate the larger rear cargo area; the signal variants are equipped with antenna mast to establish communication links. 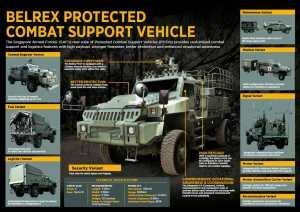 The U.S. Army has selected BAE Systems to deliver two prototype vehicles for evaluation as a potential solution for the...

Israel unveiled Sunday a laser-guided mortar system that it said could reduce civilian collateral damage, as the Jewish state faces...

China suspends economic accord with Australia