Kiev, Russia: Russia has agreed to help Ukraine finish construction on a missile cruiser, which has been stalled for almost 15 years, the Ukrainian president said on Monday.

Construction of the Slava class Admiral Lobov cruiser was launched in 1984 at the Nikolayev shipyard in Ukraine but stalled during its final stage in the late 1980s due to a sharp reduction in military expenditure. The cruiser was renamed the Ukraina in 1992.

“We have agreed that Russia will complete construction of the Ukraina cruiser,” Viktor Yanukovych said at a joint news conference after talks with Russian President Dmitry Medvedev in Kiev.

Yanukovych said the cruiser was 95% complete but could not be finished without Russia’s help.

According to the latest data, around $30 million is needed to complete the cruiser’s construction.

Slava class cruisers were designed as surface strike ships with some anti-aircraft and ASW capability. They carry 16 SS-N-12 Sandbox nuclear-capable supersonic anti-ship missiles, with launchers mounted in four pairs on either side of the superstructure.

Russia has three Slava class cruisers in service with its Navy. 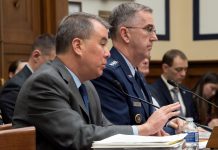