The airspace above future battlefields is expected to be increasingly congested with large numbers of unmanned aerial systems, manned aircraft, munitions and missiles filling the skies. To de-conflict airspace activities of friendly forces and rapidly counter an enemy’s actions on the battlefield requires new technologies to effectively integrate effects from all domains.

To that end, DARPA has announced its Air Space Total Awareness for Rapid Tactical Execution (ASTARTE) program, which is being conducted in partnership with the Army and Air Force. The program’s goal is to enable efficient and effective airspace operations and de-confliction in a highly congested future battlespace.

This capability is especially critical for implementing DARPA’s Mosaic Warfare concept, which calls for seamless coordination across a complex web of aerial, ground, and sea nodes providing firepower and other effects to overwhelm an adversary.

“We want to provide a more accurate and timely picture of the airspace that will allow for long-range fire missions as well as manned and unmanned aircraft operations to occur simultaneously and more safely in the same airspace.” 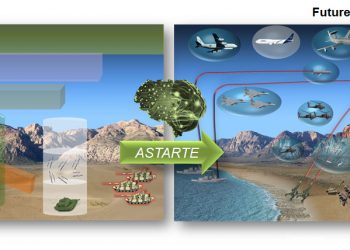 ASTARTE will focus on the most challenging airspace problem – the airspace above an Army Division operating under an enemy’s A2/AD bubble. This volume of airspace can contain Army, Air Force, Navy, Marine Corps, Special Operations Forces, coalition and adversary manned/unmanned aircraft, and munitions.

This effort was briefed to leaders in both the Army and Air Force, and it has received support throughout. As the military services wrestle with integration and future conflicts, ASTARTE complements recent Joint Staff and service-level experiments designed to address these issues and complements new warfighting concepts being developed across DoD to support Joint All-Domain Command and Control (JADC2) operations.

“Current airspace planning and control is a largely manual process with fairly static air corridors, lanes, and zones established for de-confliction that don’t allow for rapid re-tasking of air assets in a fast-paced environment,” Zablocky said. “The way we coordinate between Joint fires and airspace users today is slow and inexact, requiring verbal coordination, which often gives an adversary time to fire and maneuver unchallenged.”

ASTARTE will not only provide a continuously updating, real-time, four-dimensional (space and time) moving picture of the battlespace for friendly forces but will also use its sensor network to detect and map adversary locations, increasing situational awareness within A2/AD environments.

Unlike previous attempts to create a dynamic airspace common operating picture, ASTARTE does not seek to develop a common framework of software and hardware that Joint and Coalition partners would have to acquire. The new ASTARTE “engine” or “brain” will be designed for compatibility with existing and future command and control systems (C2) used by the military Services, and will automatically push the most current and relevant airspace information to all Joint units on their native C2 systems.

To achieve its objectives, ASTARTE is focused on three technical areas.

The first technical area is developing algorithms for understanding and decision making that can predict airspace usage conflicts, propose de-confliction solutions with associated risk levels, and direct sensors in the ASTARTE network to maintain the necessary airspace picture at a given moment in time. These algorithms would be usable from any C2 system.

Technical Area 2 addresses the sensors themselves, where performers will be asked to develop or leverage existing low-cost sensors to detect and track, in real-time, manned and unmanned aircraft, airborne weapons, and other potential flight safety hazards, such as unmanned balloons, in an A2/AD setting.

The third technical area calls for the development of a virtual laboratory testbed. This laboratory allows for modeling, simulation, and virtual experimentation using a combination of current C2 systems and ASTARTE technology.

“This is an excellent opportunity for proposers to create diverse teams built with academic partners and other traditional/non-traditional DoD partners with highly specialized technical expertise,” Zablocky said. “There are numerous civilian and commercial technologies such as gaming, virtualization, and artificial intelligence that could also provide unique insights and capabilities to a defense contractor team proposing to this effort.”

Two pilots have been killed in India after a Soviet-era fighter jet crashed during a training sortie, the air force...

Mounting proof of crimes against humanity in Myanmar: UN probe