One year after standoff with India, Pakistan boasts military pride

Pakistan Wednesday marked the first anniversary of its standoff with New Delhi in which it shot down and captured an Indian pilot in the disputed Himalayan region of Kashmir.

The February 2019 scuffle was the first dogfight between the nuclear-armed nations in decades.

Pakistan’s army on Wednesday flew teams of reporters to the site where Wing Commander Abhinandan Varthaman was captured in Pakistani-administered Kashmir. 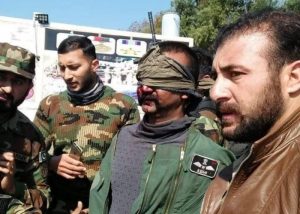 “We are proud of our armed forces and we have full confidence in them”, Prime Minister Imran Khan said during a ceremony marking the one-year anniversary of the standoff.

“They responded with full confidence,” he added.

The two countries pulled back from the brink of war after Pakistan returned the downed pilot to India.

“My appeal to the international community is that this is the time to take action, to ask where this huge subcontinent is heading, it is not a concern of Pakistan, it will concern the whole of world” Khan said.

US President Donald Trump offered to mediate the dispute, but India refused, stating that the matter is a bilateral issue between New Delhi and Islamabad.

Last year Pakistan installed a life-size statue of handlebar-moustached Varthaman in one of its museums, invoking the ire of India’s media.

Kashmir has been divided between India and Pakistan since independence in 1947, and has been the spark of two wars and numerous flare-ups between the two nuclear-armed foes.

Trump says US can avoid major epidemic as virus spreads

Biden announces end of US combat operations in Iraq

President Joe Biden declared US relations with Iraq would enter a new phase with American troops exiting combat operations in...

Britain is "closely monitoring" the takeover of UK defence technology firm Ultra Electronics by US-owned Cobham amid security concerns, the...

Biden announces end of US combat operations in Iraq