State-of-the-art military sensors today rely on “active electronics” to detect vibration, light, sound or other signals. That means they constantly consume power, with much of that power and time spent processing what often turns out to be irrelevant data.

This power consumption limits sensors’ useful lifetimes to a few weeks or months when operating from state-of-the-art batteries, and has slowed the development of new sensor technologies and capabilities. Moreover, the chronic need to redeploy power-depleted sensors is not only costly and time-consuming but also increases warfighter exposure to danger.

DARPA’s new Near Zero Power RF and Sensor Operations (N-ZERO) program seeks to overcome the power limitations of persistent sensing by developing wireless, event-driven sensing capabilities that would allow physical, electromagnetic and other sensors to remain dormant-effectively asleep yet aware-until an event of interest awakens them.

To achieve these goals, the program intends to develop underlying technologies to continuously and passively monitor the environment and activate an electronic circuit only upon detection of a specific signature, such as the presence of a particular vehicle type or radio communications protocol.

N-ZERO seeks to exploit the energy in signal signatures to detect and recognize attention-worthy events while rejecting noise and interference.

“It is the waiting for a specific event or activity that constrains mission life and drains the battery energy of these essential electronics,” said Troy Olsson, DARPA program manager.

“By cutting reliance on active power and enhancing battery life, N-ZERO aims to enable wireless, ubiquitous sensing that is energy efficient and safer for the warfighter. Our goal is to use the right signal itself to wake up the sensor, which would improve sensors’ effectiveness and warfighters’ situational awareness by drastically reducing false alarms.” 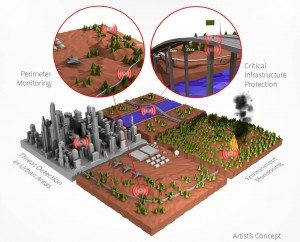 Through N-ZERO, DARPA wants to make sensors phenomenally more efficient in how they draw power when not actually sensing something of interest. The goal is to use less than 10 nanowatts (nW) during the sensor’s asleep-yet-aware phase-an energy drawdown roughly equivalent to the self-discharge (battery discharge during storage) of a typical watch battery, and at least 1,000 times lower than state-of-the-art sensors.

Specifically, N-ZERO seeks to extend unattended sensor lifetime from weeks to years, cut costs of maintenance and the need for redeployments. Alternatively, N-ZERO could also reduce battery size for a typical ground-based sensor by a factor of 20 or more while still keeping its current operational lifetime.

DARPA is seeking proposals for N-ZERO. Further details can be found in the Broad Agency Announcement at http://go.usa.gov/hN3T.

N-ZERO intends to initially concentrate on improving capabilities for sensors used for RF, electromagnetic, acoustic, and inertial detection and analysis. If successful, N-ZERO could provide future benefits far beyond military sensors alone-it could similarly untether the Internet of Things, the ever-expanding global network of wirelessly connected devices, projected to reach 30 billion by 2020.

The Internet of Things promises enormous benefits including, for example, signaling when cracks develop in bridges or sensing the health of ecological environments. But the value of interconnected sensors is undermined by their constant need for either a local power source or to have their batteries recharged or replaced. Thus, the Internet of Things today is applicable only to devices that can be either plugged into a wall outlet or located where people can actively take care of them.

Spain's defence minister warned on Friday of a possible cyberattack during the NATO summit in Madrid next week. Asked if...

Researchers with DARPA's Machine Common Sense (MCS) program demonstrated a series of improvements to robotic system performance over the course...