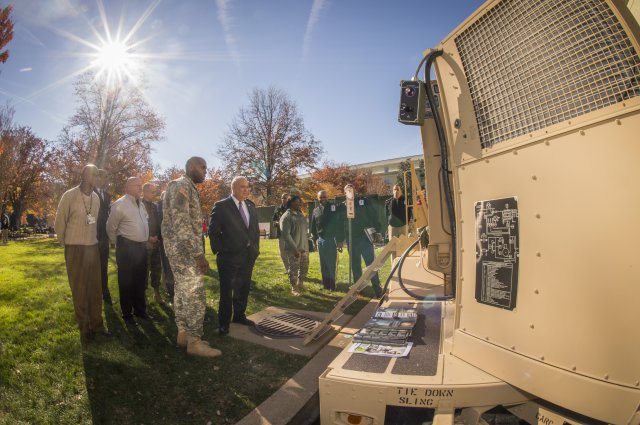 The Army displayed energy-efficient technologies in the Pentagon courtyard that are used or being developed to make Soldiers more effective on the battlefield.

The improved engine that is being developed has more power, greater fuel efficiency, and expands operational capacity, he said.

“Compared to the current engine, you would save basically 14 million gallons of fuel per year,” he said.

“It’s an important program for Army aviation and it saves tax payers’ dollars and gives increased capability to the warfighter,” he said.

“Our unit is responsible for setting up, operating and maintaining the Force Provider units, which are very energy efficient, as they utilize solar shade liners, a shower water reuse system, and a microgrid generation system to reduce the amount of fuel that is used,” he said.

The water reuse system reduces the amount of water that is necessary to be trucked into a base camp, said Wisniewski, thus keeping focus on the mission, increasing efficiency, and reducing the number of potentially dangerous resupply trips.

A rigid wall shelter, based on a 20-foot container, is now under development, he said. That unit, he said, can accommodate a kitchen, latrines, a shower system and sleeping quarters.

The stronger walls provide increased protection for the Soldiers, and the shelter is also insulated to save energy. In addition, it uses less energy to run and uses a much smaller system, he said.

“They’re all pretty much self-contained where you can drop these into a location, pull out the sides and set up a camp,” he said.

“Our mission is to provide expeditionary power solutions for the most disadvantaged environment,” he said.

At his display were solar-powered blankets, along with lighter, more efficient batteries. The technologies allow a Soldier to carry less while being more efficient.

Looking down the road, Mora said, Soldiers will have the Integrated Soldier Power/Data System, or ISPDS.

“Currently we provide a solution that transfers power through the conformal battery, but in the future, not only is the ISPDS going to transfer power, but it will also transfer data,” he said.

The transfer of data will allow Soldiers, like forward observers, to mark distances and directions with greater accuracy before calling in for fire, he said.

Also under development are “smart” textiles that are embedded into the vest of the Soldier. It is about one pound, said Mora, and transfers power and data.

“We focus on lightening the load for the Soldier and we also provide power solutions so we can make him more lethal,” said Mora.

The technologies give Soldiers power sources and allow them to recharge batteries and sustain what they are already carrying, instead of bringing in new supplies. Reduction of weight is critical, as Soldiers have to carry ammunition, weapons, food, water and clothing.

“It all boils down to how much weight is reduced on the Soldier, but getting him the maximum capacity of what he needs,” said Pessink. 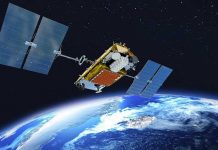 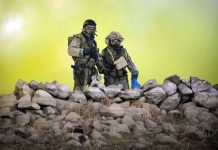 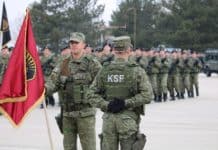