America Is A Superpower Because It Is An Air Power

There is no question that the United States has the best military in the world. The United States is unique in its ability to project military power to multiple regions of the world simultaneously, conduct multiple major combined and joint operations at a time and both defend the homeland and provide ongoing support to civil agencies.

Europe, which spends about sixty percent of the U.S. defense budget and actually has more men and women in uniform, was unable without significant U.S. support to conduct a single, modest campaign in Libya. The U.S. military continues to set the world standard with respect to most major military systems: nuclear-powered aircraft carriers, large deck amphibious warfare ships, nuclear attack submarines, strategic bombers, fifth-generation fighters, air and missile defenses, tanks and armored fighting vehicles and space and airborne ISR. Even though we don’t talk much about it the military’s cyber warfare capabilities are truly impressive.

While the U.S. has the best ground, naval and amphibious forces in the world, one thing makes it a 21st Century superpower: its dominance as an air power. The United States alone is capable of deploying its aerial assets anywhere in the world. U.S. air power can hold at risk any target set in any country and can do so from multiple directions. The U.S. Air Force is the only one capable of delivering specially-designed conventional bombs large enough to destroy deeply buried and hardened structures.

Over the past two decades, the U.S. military has repeatedly demonstrated that it can destroy an adversary’s air force and air defenses in a matter of weeks. After that, hostile ground units were toast. The ability to rapidly seize control of the air means that no soldier has died in an air attack since 1953. Over a decade of wars, American air power from the land and sea provided continual responsive fire support for tactical units on the ground.

Other nations have fighters and bombers, although America’s are the best. The U.S. also has the largest and most capable fleets of air transports, refueling aircraft and airborne ISR assets in the world. During Operation Iraqi Freedom, the Air Force flew soldiers and heavy armor deep into Iraq to seize a critical target, the Haditha Dam. Since 2001, the Air Force has maintained a continuous air bridge to Afghanistan, more than 8,000 miles from CONUS. U.S. C-17 transports are today flying French troops and equipment into Mali.

The U.S. Navy has a fleet of fixed wing transports, the C-2 Greyhounds, specifically for the purpose of moving parts and people to and from its aircraft carriers. The United States has crafted an ISR and strategic warning capability based on a sophisticated array of satellites, manned platforms and unmanned aerial systems.

Dominant air power is about much more than just platforms and weapons. It requires also the trained people and processes to plan and manage air operations, process, exploit and disseminate intelligence, identify targets and plan attacks, move supplies and route transports and repair and maintain complex systems. The U.S. had to send hundreds of targeteers to NATO to support the Libyan operation. Over decades, the U.S. military has developed an unequalled training establishment and set of ranges that ensure the highest quality pilots and other personnel.

Finally, the U.S. is the dominant air power in the world because of its aerospace industrial base. Whether it is designing and producing fifth-generation fighters such as the F-22 and F-35, providing an advanced tanker like the new KC-46 or inventing high-flying unmanned aerial systems like the Global Hawk, the U.S. aerospace industry continues to set the bar. In addition, the private and public parts of the aerospace industrial base, often working together based on collaborative arrangements such as performance-based logistics contracts, is able to move aircraft, weapons and systems through the nationwide system of depots, Air Logistics Centers and other facilities at a rate unmatched by any other nation. The ability to rapidly repair or overhaul aircraft is itself a force multiplier, providing more aircraft on the flight line to support the warfighters.

The U.S. military can go where it is ordered, respond rapidly to the crisis of the moment, move men, equipment and supplies around the world and dominate any place on the face of the earth as long as it desires because it is dominant in the air. As the Pentagon, Congress and the White House struggle with budget issues that could well require deep cuts to the military, they would be well advised to remember that it is air dominance that enables this country to remain a superpower. 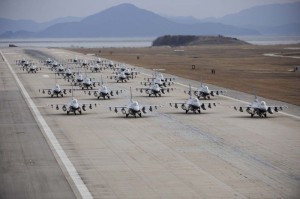 Path clear for Swiss purchase of US F-35 fighter jets

Swiss lawmakers voted Thursday to proceed with the controversial purchase of F-35 fighter jets without holding a referendum sought by...