The Program Executive Office for Ammunition has started testing a new artillery round that will provide Soldier’s with superior performance as well as lighten the military logistics burden.

The 105mm M1130E1 High Explosive Pre-Formed Fragments, Base Bleed, or HE PFF BB round with the XM350 propelling charge, is a state-of-the-art cartridge that replaces four existing high- explosive projectiles and two propelling charges with a single round.

The M1130E1 is fired from the M119 howitzer and will be used against light to medium targets, such as personnel and trucks.

It provides increased combat effectiveness for all 105mm howitzer units, but will specifically aid the mission of the light forces operating in rugged terrain, such as Afghanistan.

A 105mm cartridge consists of a projectile, cartridge case, primer and propelling charge.

Currently, four different 105mm cartridges (the M1, M760, M927 and M1130), each containing one of two propelling charges (M67 and M200), are needed to engage the various targets at distances from 1.4 kilometers out to 16 kilometers, explained Jim Rutkowski, chief of the Energetics Branch with PEO Ammunition’s Project Manager for Combat Ammunition Systems, or PM CAS. 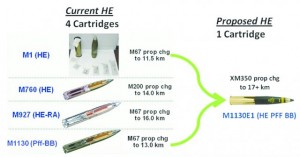 Currently, all four rounds must be available at the firing position. For instance, the M760 cannot cover the closer ranges that the M1 covers.

“After that, the logistic chain and the Soldier will only have to deal with one high-explosive cartridge, the M1130A1.”

By eliminating the need to have adequate supplies of four different artillery rounds on hand, Rutkowski said expectations are that the M1130E1 with the XM350 charge will reduce the logistics burden by 50 to 75 percent.

HOW IT WORKS
The M1130E1 combines the M1130 projectile with the XM350 propelling so that one projectile and propelling charge can cover all these ranges, plus additional range of out to 17 kilometers.

It takes advantage of a state-of-the-art, high-performance, low-flame temperature “hybrid” propellant, which allows it to cover the minimum to maximum range requirements of both the M67 and the M200 propelling charges with a single, zoned, propelling charge.

In addition to significantly reducing the logistics burden of troops, the M1130 projectile also uses a reliable base bleed with a more aerodynamic shape to achieve similar ranges without sacrificing down-range performance.

The M1130 cartridge has shown a two-to-four-times improved capability over the M1 HE round against select targets because the warhead has better fragmentation distribution, officials said.

A material release means that the item is safe for Soldiers to use; is suitable; has been fully tested to meet operational performance requirements; and can be supported logistically in the environment in which it is intended for use.

Upon completion of the M1130E1 qualification, the round will be fielded as the M1130A1 cartridge with the M350 propelling charge.

PM CAS has life-cycle responsibility for all 105mm ammunition.

The XM350 propelling charge development is being performed by ARDEC.

ARDEC also handles the integration of the cartridge case, primer, propelling charge and projectile into the M1130E1 cartridge.

NATO member Slovakia, which shares a border with Ukraine, said Tuesday it plans to buy 152 tracked combat vehicles from...

The United States and Morocco on Monday launched the vast annual "African Lion" military exercise, amid heightened tensions between the...

Relief and concern in Sweden after NATO deal with Turkey