US military personnel and equipment arrived at Incirlik Air Base in southeastern Turkey to support NATO’s Patriot battery deployment at Ankara’s request, EUCOM, based in the southwestern German city of Stuttgart, said in a statement.

The United States will transport some 400 troops to Turkey in the next several days to operate two Patriot batteries supporting NATOs mission there. Additional equipment will arrive by sea later in January.

“The deployment of six Patriot batteries, including two each from Germany and The Netherlands, is in response to Turkey’s request to NATO,” EUCOM said. 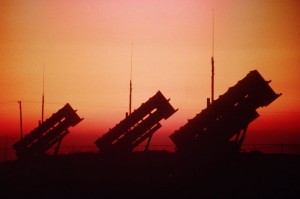 alation of the crisis along the Alliance’s border.”

EUCOM deputy commander Charles Martoglio said the Patriot batteries would fall under NATO command “when set-up is complete and the systems are operational in the next several weeks”.

“The deployment will be defensive only and will not support a no-fly zone or any offensive operation,” EUCOM added.

The duration of the deployment will be determined by the contributing nations in coordination with Turkey and NATO, it said.

Germany, The Netherlands and the United States agreed to supply the ground-to-air missile batteries, which Turkey requested after repeated cross-border shelling from Syria, including an attack that killed five civilians.

NATO-member Turkey, a one-time Damascus ally, has turned into one of its most vocal opponents over the 21-month civil war in Syria that monitors say has killed some 60,000 people.

The deployment will continue Monday when two Dutch Patriot batteries will be transported to the port of Eemshaven from a military barracks in Vredepeel in the southeast of the country, the Dutch defence ministry said.

The next day, 30 Dutch and 20 German soldiers charged with preparing for the missiles’ arrival by ship, scheduled for January 22, will fly from the Dutch air base of Eindhoven to Turkey.

Another 270 Dutch troops, who will operate the missiles, will leave for Turkey on January 21, the ministry added.

The German defence ministry said that its Patriots would be shipped Tuesday from the port of Luebeck-Travemuende and were due to arrive at the Turkish port of Iskenderun on January 21.

The main German contingent of up to 350 soldiers will begin deploying in mid-January.

US draws plans for up to 9,000 troops in Afghanistan

US approves sale of 84 Patriot missiles to Kuwait

The United States said Thursday it has approved the sale of 84 of the most recent generation of Patriot missiles...

Advanced Air and Missile Defense, in the Hands of Soldiers

It's a cold December morning at White Sands Missile Range in New Mexico, and two surrogate cruise missile targets have...

US indicts NKoreans, Chinese over $2.5 bn network to dodge sanctions

US approves sale of 84 Patriot missiles to Kuwait

Advanced Air and Missile Defense, in the Hands of Soldiers