Minelab to supply US military with mounted mine detection system

A South Australian company has won a development contract to supply the United States military with advanced mine clearance technology.

Minelab Electronics, a company renowned for its metal detectors, has partnered with a American company NIITEK that makes ground penetrating radar to produce a mine sweeping device that can detect both metal and shapes in the ground.

Together they have won a contract to supply a mounted mine detection system for the US military Husky vehicles.

The general manager at Minelab, Peter Charlesworth, said that the combination of his Single Transmit Multiple Receive (STMR) array and NIITEK’s radar meant that the new device detects both metal in the ground and shapes thereby achieving unprecedented high probabilities of detection and low false alarm rates.

“The new system can find the metal pins on mines as well as the shape of the object, so this makes it more accurate,” Charlesworth said from Minelab’s headquarters in Adelaide, South Australia.

Marrying the two technologies together has taken two years of testing to ensure it could find anti-personnel landmines, anti-tank landmines and Improvised Explosive Devices.

Charlesworth said the contract was a significant win for their countermine business, with the potential to outfit the hundreds of Husky Mine Detection Systems (HMDS) deployed by the US military once final development was complete in June 2016.

The initial cost-plus-fixed-fee development contract is worth USD$26.1 million, for the two partners to engineer and develop the system over two years. They then have the option to support the HMDS once fitted. 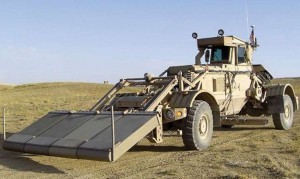 “The selection of STMR for integration with HMDS is an exciting award for Minelab and supports the potential we recognized in this product when it was first developed. Additionally, Minelab is delighted to be collaborating with NIITEK which builds on other projects in which both companies are engaged,” said Charlesworth.

Minelab’s STMR system has been used in humanitarian demining operations for the past eight years and has undergone continuous improvement and development.