X-51A Waverider flight planned for May 25

WRIGHT-PATTERSON AIR FORCE BASE, Ohio: Weather permitting, Air Force officials said the X-51A Waverider will make its first hypersonic flight test attempt May 25 after it is released from a B-52 Stratofortress off the southern coast of California. 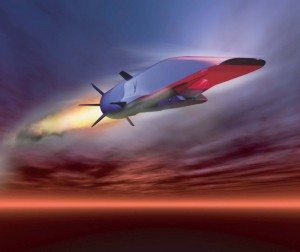 The unmanned X-51A is expected to fly autonomously for five minutes, powered by a supersonic combustion scramjet engine, accelerating to about Mach 6 and transmitting vast amounts of data to ground stations before breaking up after splashing down into the Pacific, as planned. There are no plans to recover the flight test vehicle, one of four built.

The longest previous hypersonic scramjet flight test performed by a NASA X-43 in 2004 was faster, but lasted only about 10 seconds and used less logistically supportable hydrogen fuel, Mr. Brink said.

The X-51A program is a collaborative effort by representatives from the Air Force Research Laboratory and the Defense Advanced Research Projects Agency, with industry partners The Boeing Company and Pratt & Whitney Rocketdyne.

The X-51 will depart Edwards Air Force Base, Calif. and be carried aloft under the wing of a B-52 belonging to the Air Force Flight Test Center there. It will be released at approximately 50,000 feet over the Point Mugu Naval Air Warfare Center Sea Range. A solid rocket booster will accelerate the X-51A to approximately Mach 4.5, before being jettisoned.

Then the cruiser’s scramjet engine, remarkable because it has virtually no moving parts, will ignite. Burning the same JP-7 jet fuel once used by the SR-71 Blackbird, it will accelerate the X-51A to Mach 6 as it climbs to nearly 70,000 feet. Hypersonic combustion generates intense heat so routing of the engine’s own JP-7 fuel will serve to both cool the engine and heat the fuel to optimum operating temperature for combustion.

A U.S. Navy P-3 Orion will aid in transmitting telemetry data to people at both Naval Air Station Point Mugu and Vandenberg AFB, Calif., before it arrives at its final destination: Ridley Mission Control Center at Edwards AFB.

The May 25 hypersonic test will actually be the third time the X-51 has flown, but in each previous instance it has remained attached to the B-52’s wing. The first captive carry flight Dec. 9, 2009, verified the B-52’s high-altitude performance and handling qualities with the X-51 attached and tested communications and telemetry systems. The other flight, intended essentially as a dress rehearsal for the hypersonic flight, took place earlier this year.

Program officials said this will be the only hypersonic flight attempt this fiscal year, a change from the original test plan which was to fly in December 2009 then three more times in 2010.

A combination of factors, including access to supporting flight test and range assets, was cited as the reason for the pause. Availability of the Air Force Flight Test Center’s B-52, which has been in high demand to support a number of other high-priority weapon system tests and is readying to undergo periodic depot-level maintenance later this year, was noted.

“This is an experimental X-plane and it’s a complicated test. We knew the original schedule was aggressive and we would need to be flexible,” Mr. Brink said. “It’s also expensive to keep a staff of engineers and support staff at the ready and then not be able to fly when supporting assets aren’t available. So we elected to make only one hypersonic try this spring and then pause for a few months to conserve funding.”

The shark-like shape of the 14-foot long X-51A cruiser gives a hint to the technologies it is designed to explore, Mr. Brink said. Virtually wingless, it is designed to ride its own shockwave, thus the nickname, Waverider. The heart of the system is its Pratt & Whitney Rocketdyne SJY61 scramjet engine, but other key technologies that will be demonstrated by the X-51A include thermal protection systems materials, airframe and engine integration, and high-speed stability and control.

Officials said the X-51A program will pave the way to hypersonic weapons and future access to space. Since scramjets are able to burn atmospheric oxygen, they don’t need to carry large fuel tanks containing oxidizer like conventional rockets, and are being explored as a way to more efficiently launch payloads into orbit.

US President Joe Biden's administration has temporarily frozen for review a massive package of F-35 jets to the United Arab...

Russia urges Biden to be ‘more constructive’ on arms treaty