The IDF will soon begin using a special robot to gather intelligence in underground areas. Another vehicle will scan enemy territory before Israeli forces even enter the field. Check out the high-tech vehicles set to hit the ground in Israel.

Major threats are evolving on Israel’s borders every day. Hamas’ underground network in Gaza trains daily to infiltrate Israel, as Hezbollah expands its arsenal of weapons on Israel’s northern border. Meanwhile, terrorists in Judea and Samaria attempt to smuggle weapons through crossings and attack Israeli communities.

The superiority of Israel’s technology is its greatest deterrent against these threats. Among its finest tools are unmanned ground vehicles, which could redefine Israel’s capabilities in the near future.

From small devices that enter buildings to large cars equipped with 360-degree cameras, vehicles without drivers are nothing new for the Israeli military. The IDF’s Ground Forces plan to expand its use of these tools, as experts invent new vehicles based on creative and cutting-edge designs. 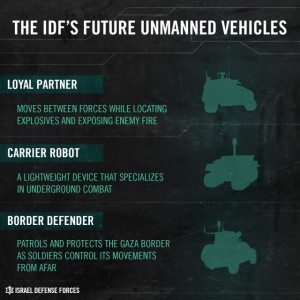 Small and Clever: The Carrier Robot
In just a few years, soldiers facing the threat of terror tunnels will carry special robots on their backs. The Carrier Robot, capable of scanning areas underground, will accompany infantry fighters and engineers in underground combat if necessary. IDF experts will program the devices to patrol dangerous areas and gather intelligence for soldiers in the field.

“The idea is to enter operations with lightweight, portable robots that can function for a number of hours,” explained Major Lior Trablisi, the head of the IDF’s robot and technology unit. The device will do things that no human can, such as mapping entire buildings and terror tunnels. The groundbreaking technology will allow soldiers to understand the exact appearance of any structure, helping them avoid the dangers of underground or urban combat.

The IDF prefers endangering a robot to risking a human life, Maj. Trablisi stressed. “A robot doesn’t deal with the same difficulties of lighting, gunfire or breathing [in tunnels],” he explained. Once the IDF determines the cost of building the robot, it will test the device and put it into action.

Man’s Best Friend: Protector at the Front
Another next-generation vehicle is the Loyal Partner, a device that can maneuver terrain like a Hummer or an Armored Patrol Carrier (APC), while carrying weapons and additional technology for the battlefield. “The robot will be used as a line of defense for the forces at the front,” said Maj. Triblsi. “It will be able to move while identifying bombs and the source of gunfire.”

The vehicle’s first model will be ready toward the end of the IDF’s current multi-year plan. “Its main advantage is that it will lower the risks facing combat soldiers,” Maj. Trablisi said. “It will be able to carry out missions without considerations of risks or manpower. It can remain in the field for long periods of time, carrying out missions precisely and providing a relative advantage to soldiers.”

Defender of the Gaza Border
In recent years, unmanned vehicles have multiplied in the IDF’s southern sector. The devices bolster the effectiveness of patrols near Gaza and operate in almost any type of weather. Their major advantage is their success in preventing kidnappings and reducing attacks against soldiers and civilians.

At the beginning of 2015, a vehicle called the Border Protector will begin patrolling the Gaza border area. Like its predecessors, the vehicle will travel with advanced cameras and carry out searches meant to identify terrorists. The newest version of the vehicle will be upgraded so that soldiers can control it from remote areas.

The IDF expects to deploy at least one Border Protector in each battalion stationed along the Gaza border. Soldiers will control all of the vehicles in the same operation room, which can be located long distances from the border area. “It’s possible to guide the vehicle to all sorts of places without operation rooms nearby,” Maj. Triblisi explained.

As their technology advances, robots and remote-controlled vehicles will remain invaluable assets on modern battlefields. In the next generation, they will become indispensable tools for the surveillance of enemy activities, without putting Israeli forces in danger.

MMRCA Deal: Rafale Negotiations Expected to Be Wrapped Up In 3 Months