By end-2010, six Army units will get the Skyblade III mini Unmanned Aerial Vehicle (UAV) system which improves situational awareness and the flow of information during operations. Designed to be lightweight and portable, it will provide the units with enhanced reconnaissance and surveillance capabilities.

The system comprises a Mini Operating Console (MOC) and the mini-UAV itself, which are packed into two backpacks. These packs – which weigh roughly 20kg each – will be carried by two soldiers into the field. Requiring only 20 minutes to set up and launch, each mini-UAV sortie can last up to an hour, after which it will require fresh batteries.

While carrying the packs is hardly a walk in the park, the operational advantages the Skyblade III brings to the table far out-strips its heft. Equipped with cameras for day and night use, the Skyblade III streams the visual data it collects instantly to its controller on the ground. This information is then analysed by the operators before it is reported to higher headquarters (see infographic). 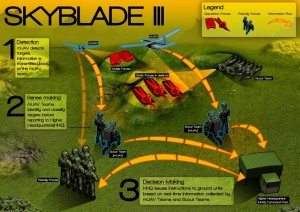 With its operating range of 8km, having the Skyblade III also means a higher chance of survival for the scout teams that operate them. “In the past, we had to get very close to opposing forces in order to gather information. With the Skyblade III, my team can be further away from hostile territory, yet still give accurate reports to my commanders,” said 3rd Sergeant (3SG) Quek Jian Liang, a Scout Team Commander in the 3rd Singapore Infantry Regiment (3 SIR).

Elaborating on the Skyblade III’s edge, LTC Willy Lock, Commanding Officer 3 SIR, said: “The advantages are twofold: During an assault, we are able to see much further afield, and in defence, we are able to plan counter-manoeuvres much earlier because the scout teams are able to detect the presence of opposing forces much earlier.” When cyberpioneer spoke to LTC Lock, his unit was in the midst of conducting defensive operations as part of a larger training exercise.

Apart from operational advantages, the Skyblade III’s developers – researchers from DSO National Laboratories – were also mindful about usability. The result: an easy to control mini-UAV with a virtually foolproof launching system.

The Skyblade III can be launched either by hand or through bungee-assistance. The latter launch technique has the mini-UAV sitting on launching rails while connected to a slingshot-like rig. Once triggered, the rig powers the mini-UAV into the air and mechanically disconnects when the Skyblade III is safely airborne. To land, the mini-UAV performs a deep stall and an airbag is deployed from its belly which cushions the impact from landing.

According to SLTC Ong, the bungee launch technique has a stellar track record, with an unblemished success rate.

SLTC Ong believes the addition of the Skyblade III will greatly enhance the Army’s reconnaissance and surveillance capabilities.

Developed in collaboration with DSO and made by ST Aerospace, the Skyblade III was developed indigenously and is a product of the cooperation between the Army and its defence industry partners.

The mini-UAV project was initiated in 2002 with the first prototype – the Skyblade I – being tested in Exercise Thunder Warrior (New Zealand) and Exercise Wallaby (Australia) a year later. While the Skyblade was still being developed, commercially available mini-UAVs such as the Birdeye 410 and Skylark were used to shape the tactics and procedures for the Singapore Armed Forces’ (SAF’s) operations. This is why the SAF was able to bring the mini-UAV capability to units within a short time frame, said SLTC Ong.

Work to bring the Skyblade III advanced capabilities to the battalion scouts and Brigade Reconnaissance Surveillance Targeting Acquisition Teams within these units started in 2009. By end-2010, they are expected to be operationalised on the system. To date, 44 Skyblade III operators have been trained.

US Drawdown in Afghanistan to Begin in July

US concerned over French ship for Russia:WikiLeaks

Germany will send seven self-propelled howitzers to Ukraine, the defence ministry said Friday, ramping up deliveries of heavy weapons to...

Belarus, a Moscow ally that shares a border with Ukraine, launched "surprise" military maneuvers on Wednesday, to test the reactive...

US concerned over French ship for Russia:WikiLeaks

Turkey ‘will not say yes’ to NATO membership for Sweden, Finland: Erdogan