Staff member
Part 1 of 2: Concurrent activities with other navies at sea

1. At the end of 2020, the size of China’s navy— was approximately 360, compared to the United States’ 297, according to the US Office of Naval Intelligence. It also projected that China’s navy will increase to 400 ships in 2025 and 425 in 2030. Given the growth of the Chinese Navy, there are two paths to peace — (a) the absolute surrender of a country’s national interests (eg. the Philippines and Cambodia); or (b) working with a coalition of countries to align economic and security interests (eg. Australia, South Korea, Indonesia, Vietnam and Singapore).


(a) Wang said the bilateral relationship has benefited from the strategic leadership of the leaders of the two countries, the joint efforts of people from all walks of life in both countries and the fact that the Singapore’s side has always viewed China’s development objectively and rationally. He highlighted that Singapore is adept at finding cooperation opportunities from China’s development and striving for win-win prospects.​
​
(b) Coming about two weeks after US Vice President Kamala Harris' trip to the region that sought to pit countries against China, Wang's trip showed that China and the neighboring countries are aiming to work in partnership to strengthen diplomatic relations. According to the Secretary-General of ASEAN, China, Singapore and Japan have finished ratification of RCEP, as a key move to enable post-pandemic economic recovery.​
​
https://twitter.com/i/web/status/1437755511227576320
(c) During the Singapore-China Defence Policy Dialogue (DPD) held on 14 Sep 2021, via video conferencing, both sides:​
(i) expressed their commitment to strengthen defence cooperation as agreed under the enhanced Agreement on Defence Exchanges and Security Cooperation signed in Oct 2019, that includes the regularisation and scaling up of bilateral exercises and interactions across the Services such as the flagship bilateral army and naval exercises Exercise Cooperation and Exercise Maritime Cooperation; and​
​
(ii) discussed ways to strengthen cooperation under the ASEAN Defence Ministers' Meeting-Plus framework and broaden ASEAN-China defence cooperation to build mutual understanding and confidence among the defence establishments.​
(d) Chinese State Councilor and Foreign Minister Wang Yi said that his recent four-nation tour to Vietnam, Cambodia, Singapore and South Korea has helped upgrade mutually-beneficial cooperation among all sides. This trip follows upon the Apr 2021 trip by Philippine Foreign Secretary Teodoro Locsin Jr, Singapore Foreign Minister Vivian Balakrishnan, Malaysian Foreign Minister Hishammuddin Hussein, and Indonesian Foreign Minister Retno Marsudi to China upon Wang’s invitation.​
https://twitter.com/i/web/status/1440638108165279749
3. Singapore Navy conducting a Passage Exercise with the PLA(N) in Sep 2021.
Last edited: Oct 14, 2021

Staff member
Part 2 of 2: Concurrent activities with other navies at sea

​
(a) Given that ASW is a combined operation and the days of a single vesssl searching for lurking submarines are long gone, it makes financial sense to train with the Indian Navy. Four F-16s took part to simulate the air threat and provide realism for the anti-air serial. The Indian Navy gets tremendous value as their PPOs get to hunt an AIP submarine and also defend against notional enemy F-16s.​
​
(b) This way within the task group for the exercise serials, there will be a number of options, including a P8I and organic naval helicopters to hunt the Archer class submarine that is playing the role of the enemy for SIMBEX serial on ASW.​
https://twitter.com/i/web/status/1448559853211848704
5. Exercise Bersama Gold 2021 is a Five Power Defence Arrangements (FPDA) tri-service exercise involving assets and personnel from Australia, Malaysia, New Zealand, Singapore, and the United Kingdom — with the participation of 2600 personnel, 10 ships, one submarine, six maritime helicopters, three maritime patrol aircraft, 25 fighter aircraft, two support aircraft, and a G550 CAEW for command and control. As part of Bersama Gold 2021, a flypast and naval vessel display will be livestreamed on the Ministry of Defence's social media platforms on 18 October at 1200hrs (Singapore Time). The Naval vessel display will feature Australia's HMAS Canberra, Malaysia's KD Lekiu, New Zealand's HMNZS Aotearoa, Singapore's RSS Steadfast, and the United Kingdom's HMS Diamond.

6. The Bersama Gold 2021 exercise is an enlarged biennial Bersama Shield exercise but was renamed to Gold to reflect the 50th anniversary of the FPDA. The exercise is held mostly in the South China Sea between the coasts of Malaysia and Singapore, where participating nations will conduct anti-air and anti-submarine exercises, gunnery firings and maneuvering drills. Air forces from the FPDA member-nations will perform air defense exercises over the airspace of West Malaysia and support the maritime component in anti-submarine exercises; and this also marked the first field exercise for the FPDA since 2019, with the COVID-19 pandemic reducing drills to command post exercises held virtually.

7. According to Euan Graham, the FPDA is the Cinderella of Southeast Asian defence engagements. Often overlooked as an anachronism, including in member countries, the FPDA’s understated value is well understood by officials and military professionals on the inside. The limited visibility of the FPDA within member countries is not a problem for as long as the political will exists to maintain it. Three significant issues that weigh on the FPDA’s long-term survival.

​
One, the biggest risk in this regard is that Malaysia’s commitment to the FPDA wanes because of a lack of political support, due in part to ignorance of the arrangements.​
​
Two, Malaysia and New Zealand have fallen so far behind Australia, the UK and Singapore that the FPDA is now a two-tier grouping in capability terms. Ostensibly, the FPDA is an even partnership across the five signatories. But militarily it is in danger of becoming the ‘3+2’ defence arrangements.​
​
Three, potential for enlargement periodically surfaces as a question for the FPDA. There is zero appetite for this from the two Southeast Asian members, who fear it will dilute the foundational commitment to defending Malaysia and Singapore. This conservatism competes in tension with the desirability of cross-bracing the FPDA to other countries and structures in the region.​
Last edited: Oct 14, 2021 The new CCL is a 26 m-long craft designed to be highly maneuverable and to achieve high speeds, and armed with a stabilized 12,7 mm OTO Melara Remote Weapon System.

"Singapore finally, officially unveils its secret new weapon"
Singapore Botanic Gardens otter attack: Man thought he was going to die (9news.com.au)
I'm not sure if the otters belong to the the RSN or the Army, but they appear effective. Keep those wimpy Brits out.
O

anybody know what's the long square in front of the main 76mm gun on the LVM are for?

optionsss said:
anybody know what's the long square in front of the main 76mm gun on the LVM are for?
Click to expand...

Sorry, i have no idea.

Something about the Type 218SG.
Navyrecognition tells that German government has approved the delivery of one type 218SG submarine to Singapore. Actually weird that the approval is only given after construction of the first boat, and not during the signing of the contract.

Germany approves the delivery of one Type 218SG submarine to Singapore

The former Merkel German government has approved the delivery of one type 218SG submarine to Singapore
www.navyrecognition.com

But according to this site (based on information of militaryleaks) Singapore added one more Type 218SG on the orderlist. Is this true or a misunderstanding of the announcement in December 2021? 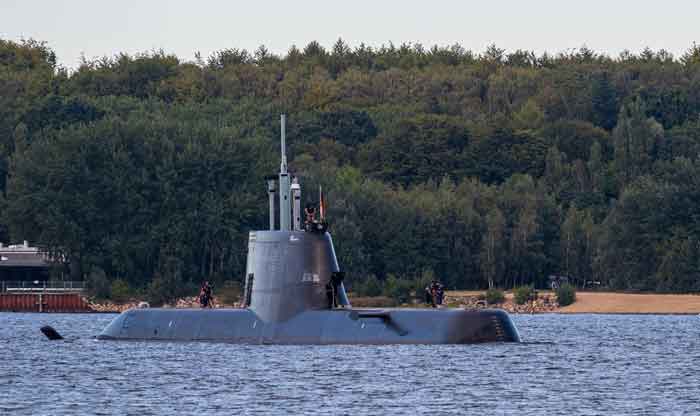 Sandhi Yudha said:
But according to this site (based on information of militaryleaks) claims that Singapore added one more Type 218SG on the orderlist. Is this true or a misunderstanding of the announcement of 23 December?


https://twitter.com/i/web/status/1475350728910594049
Mike Yeo, explains — it’s not a new sale as the article suggested but export clearance for the delivery of the RSS Invincible. Some in the media just mis-understood the final German export approval step for the 1st of the class of 4.
Last edited: Jan 3, 2022

cdxbow said:
"Singapore finally, officially unveils its secret new weapon"
Singapore Botanic Gardens otter attack: Man thought he was going to die (9news.com.au)
I'm not sure if the otters belong to the the RSN or the Army, but they appear effective. Keep those wimpy Brits out.
Click to expand...

optionsss said:
anybody know what's the long square in front of the main 76mm gun on the LVM are for?
Click to expand...

I suspect it is related to a future LO gun mount, if they decide to swap out the 2nd hand 76mm gun, with a new one. See photos of the FALAJ 2 class Patrol Vessel, for possible LO treatment.
Last edited: Jan 3, 2022

Keeping in mind that I am aware of a small well armed team of Malaysian special forces members (in civilian dress), was on board the intruding Malaysian Government vessel (anchored in Tuas port waters in the 2018 to 2019 period of tension), it pays to be prepared for an escalation of force, during operations against grey zone conduct.

In addition, the new toys for a layered response includes the new 26 metre long Combatant Craft Large & Combatant Craft Medium of the Naval Diving Unit (NDU) under the Special Operations Command Centre (is part of a wide-ranging effort to enhance its the ability to conduct counter-terrorism operations). Janes defence was first to report about this new NDU operated boat, back in Dec 2018.

With regard to SIN-Malaysia disputes in 2018 as a metaphor, some Malaysians decide what to eat based on the calorie/nutrition content of food. Some Singaporeans decide that based on what tastes good. Often, followers of Dr M are evaluating information for how much it will hurt PM Lee or whoever related to Singapore’s position — not whether what Dr M says in 2018 is factually accurate, but whether it will have the impact the Malaysians want. Those are two fundamentally different processes.
Last edited: Jan 22, 2022
O

I have a question about the STING EO Mk2 fire control radar for the formidable class, is it a gun control radar? Also, from the photos available did Singapore replace them with an optical control system or the other way around.

optionsss said:
I have a question about the STING EO Mk2 fire control radar for the formidable class, is it a gun control radar? Also, from the photos available did Singapore replace them with an optical control system or the other way around.
Click to expand...

Why would you be wanting to know that? Singapore is usually closemouthed about its capabilities and we respect its OPSEC rules.
O

ngatimozart said:
Why would you be wanting to know that? Singapore is usually closemouthed about its capabilities and we respect its OPSEC rules.
Click to expand...

really that's OPSEC?
you can see the difference between the ships with optical system and fcr from open source photo. also you can see ships change the fire control systems.

Some one should inform Singapore navy about seaforce.com

so after some search found this, basically Singapore replaced the optic system with Thales STIR 1.2 EO Mk2 FCR, it's for the main gun , also can use the radar to warn potential hostile aircraft they are being lit.