Nah, it's not selected.

The article is based off of a set of answers provided by the government to a information request by parliamentary representatives of the FDP party. This included providing a short evaluation of "points for and against" C-295 (MPA and MSA) and P-8A in the selection process - they didn't ask about the RAS-72, so no answer was given on that.

As one would expect for a information request ahead of a possible procurement decision in parliament, other questions in the set mostly explored to varying degree:

There was apparently a separate - not formal - question from a FDP member (Christian Sauter, member of the defense committee of the parliament) with regard to the French Atlantique 2 offer, to which he then posted a recap of the answer on Facebook - haven't seen the actual answer published anywhere. The answer basically was that:
Sauter (not the government) draws from this the conclusion that the P-8A Poseidon is the only solution for a suitable MPA successor and should be procured immediately.

It should be noted that the German rejection of the Atlantique 2 is usually seen as part of unrelated recent mutual strongarming over FCAS. And one has to take into account that Christian Sauter is affiliated in various ways with several pro-atlanticist think-tanks (i.e. in favor of US allegiance), in particular Deutsche Atlantische Gesellschaft and Gesellschaft für Sicherheitspolitik.
H

Maybe it is only Sauter but to be honest he does have a good case. Given that the Germans are only seeking around 5 aircraft it seems like it is an unnecessary risk developing an entirely new design that probably wont be as capable as one that is already available.
K

kato said:
The route as decided in early march will decidedly not involve Germany in any sort of FONOPs but will also not make a port visit in China.
Click to expand...

The route has been modified - going the other way around - and is now planned to include a port visit in Shanghai on the way back. In other words, the chancellery has overruled the ambivalent foreign office and opposing ministry of defense on that matter.

For details see this article: 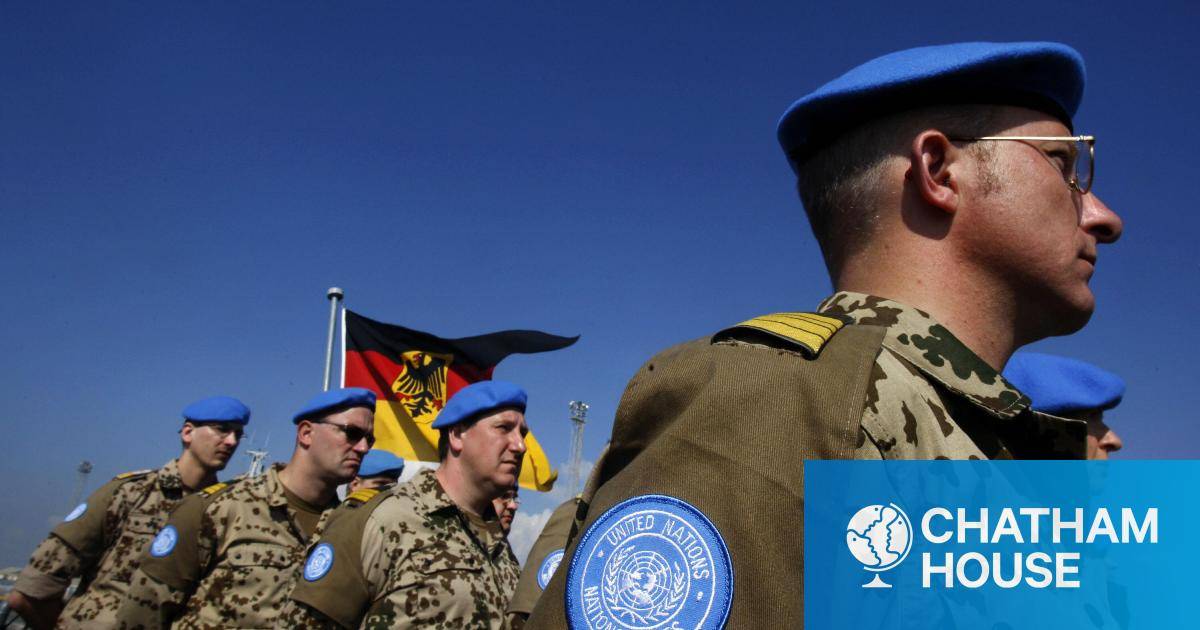 Changing plans show how naval deployments can undermine rather than help both the upholding of international law and a strategy of deterrence against China.

Staff member
IMO The P8 is one of the more sensible items to procure. Its based off the mega common 737, which will make ongoing operation incredibly low cost. It has terrific capability, not just in ASW, but in search and rescue, in maritime strike etc. Just like the P3's are worth their weight in gold now, the P8 will become valuable items in the future, sought by all nations looking at maritime surveillance, enforcement etc.

As we have recently seen with missing, submarines, surface ships and aircraft, that kind of capability can be used for humanitarian and non-conflict capabilities. They are also globally deployable. Australia had deployed its P8's to the middle east gulf, or operated out of Japan, or Guam. Probably not factors in Germanys mind currently, but still. The mind set that Germany only has to worry about their "20 minutes of coast line" needs to die. Global order is at stake.

Internationally, Germanys frigate tour will be interesting. I can see the Japanese, the Koreans, the Australians, the Americans, the British, the French, the Indians nor any of the smaller Indo-pacific nations not getting what Germany is trying to do. I also predict the Chinese and the Russians will interpret and play it differently as well via propaganda and be met with celebration. Everyone has their own POV and aims. I guess we will see how at sea German foreign policy is in the indo-pacific. Perhaps a tour with port calls is needed to really understand the situation. They should take Maas onboard, this could be an interesting field trip.
K

StingrayOZ said:
Probably not factors in Germanys mind currently, but still. The mind set that Germany only has to worry about their "20 minutes of coast line" needs to die. Global order is at stake.
Click to expand...

The German requirement is to have up to two MPA deployed plus one spare available for training and urgent replacement needs for these missions. The total number of MPA Germany wants to have derives directly from this (5 P-8A with 60% readiness or 6 P-3C with 50% readiness).

Current deployment missions are EUNAVFOR MED IRINI in the southern Mediterranean (call sign Joker) and EUNAVFOR ATALANTA in the Indian Ocean (call sign Jester). Due to lowered availability right now (2021) these missions are basically serviced only alternatingly, with Joker considered more important. There is no other reason or requirement given beyond these deployments to maintain the capability set of an MPA at all, and there is no patrollingover the North Sea or Baltic Sea. None intended with the procurement either.

* Small note on these missions: While Jester is based in Djibouti in eastern Africa and flies out of there, Joker remains based at Nordholz and is effectively flown directly (with a pit stop to fill up the tanks in South Germany), hence more of a "local" mission. Both missions are considered German Navy contributions to international missions "in lieu of sending ships" pretty much.

Staff member
My argument to Germany is, Germany owns 5% of the global merchant fleet, and China has only recently overtaken (2020) German in terms of shipping containers. Of countries that will be affected by a breakdown in global trade, global order, will be Germany. When China starts sinking merchant ships, it will be European merchant ships. I know Germany and Germans don't think this way, but I wonder if pressure will come down this line of thinking.

IMO if Germany acquires 5 P8's they are making significant gains in capability even if its 5 vs 6.

IMO these type of missions will be more attractive to Germany, sending ships out of the European sphere IMO is going to be unusual IMO. The frigate tour will be interesting and interesting what comes out of it. However, its not exactly going to demonstrate German naval power, but perhaps more useful of getting the temperature on the ground in different places.
K

Verified Defense Pro
a) (unrelated to the rest) The third F125 class frigate, F224 Sachsen-Anhalt, was commissioned today. The fourth and last ship, F225 Rheinland-Pfalz, is planned to get commissioned in Q3/21.

b) F124 class frigate F220 Hamburg completed an exercise in Norway last week in which missiles (SM-2, ESSM, RAM, Harpoon) were fired against 15 air and 2 sea target drones. The number of missiles fired is a bit variable in reports, either 17, 20 or "about 30". Given that for RAM double-tapping on a single target is standard modus operandi i'd personally tend to go towards that latter number. Originally K130 corvette F262 Erfurt was supposed to join in on that as well, but had to withdraw from the exercise due to a Covid case onboard.

c) The ship also trained naval gunfire support, firing 150 rounds of 76mm against shore targets, with gunfire directed by spotters provided by the army (413th Infantry Battalion) and navy (Sea Battalion). Accompanying tender A515 Main joined in on that with 100 rounds from her 27mm gun (which i'm fairly sure is more than one magazine...), and otherwise mostly served to get telemetry for the missile firing. Apparently similar NGS training was already performed last year at the Andoya missile range - previously the German Navy didn't really train that since the late 70s. For missile training Andoya has been used occasionally since 2016. Germany and Norway signed a contract earlier this year for continued use of the range by the German Navy over the next couple years.

d) A P-3C Orion was also deployed during the exercise. Which is somewhat notable given how few we supposedly have available...
Last edited: Yesterday at 6:52 PM
K

kato said:
The A707 replacement for A704 was then tendered out, but withdrawn (this December) since initial offers would have cost 425 million Euro per ship instead of 250 million planned. In addition FSG was contesting the closed-bidder tender since they were not invited to it - applying in court that the ship are not warships in the sense of recent protectionist laws. The proposed design changes adress both issues, and it's not unlikely the rebooted new tender will be at minimum Germany-, possibly EU-wide and not limited to two specific shipyards like the first one.
Click to expand...

For the original tender two bidders have been downselected - out of "a handful" shipyards asked for quotes.

FSG's court case against the tender is ongoing and will be judged at Upper State Court Düsseldorf on June 9th.

Both downselected bids significantly break the declared upper barrier of 539 million Euro for the full procurement. The MoD according to leaked correspondence considers that "not too much of a problem" but will negotiate with both bidders about it - considering it "unlikely" to push them to within the budget however. Plans are to negotiate and then select a winner, with procurement subject to approval by the budget committee where they'll submit it on June 23rd. This of course does not take into account that FSG might very well win their case before that.

Besides the earlier-mentioned reductions in speed requirement there were also some cutbacks in general military outfit in the renewed tender, such as armour for certain parts of the ship or specific electronics equipment to be included. For scale of the submitted bids, it's considered a given that equivalent ships could be ordered as civilian vessels from Asian shipyards for about 100 million each. "Asia" presumably meaning South Korea, that is.

MV Werften is formerly known as Nordic Yards, and currently owned by a tourism group from Hong Kong (Genting). Before Nordic Yards they were Wadan Yards owned by Aker/STX. While since the takeover they have only been producing small cruise ships, they should could in theory just copy off their Nordic AT19 design, an ice-breaking tanker of just about the dimensions requested that they built for a Russian company ten years ago. Genting explicitly has stated that they plan to get the yard back into this kind of special-purpose shipbuilding again.
Last edited: Yesterday at 4:56 PM
You must log in or register to reply here.
Share:
Facebook Twitter Reddit Pinterest Tumblr WhatsApp Email Link
Top