ngatimozart said:
There is that, but who would there be a nuclear arms race with? Indonesia can't afford to enter one, and neither can the Philippines. Pakistan & Indian are already nuclear armed powers. Malaysia and Singapore probably, but I think @OPSSG is far more qualified to answer that than me. SK and Japan. I think Japan wouldn't have a problem with it and SK is an unknown to me. Some sectors of NZ society, the anti US ones, would scream blue murder, and demand that we cut our relations, but I think that a work around could be agreed to. Maybe the CoA would just have to certify that every QANTAS aircraft isn't carrying nukes
Click to expand...

You overestimate the cost of a nuclear weapons program when you say Indonesia and Philippines can't afford to enter one.

The Manhattan Project began modestly in 1939, but grew to employ more than 130,000 people and cost nearly US$2 billion (about $23 billion in 2018 dollars). Over 90% of the cost was for building factories and to produce fissile material, with less than 10% for development and production of the weapons.
Click to expand...

While that's from Wikipedia, the cost of the Manhattan project is indeed approximately US$ 2 billion and we can just put it into an inflation calculator to get the current dollar amount.

For a more recent example, consider that Pakistan's economy is roughly the same as the Philippines. 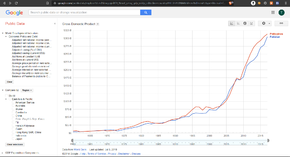 If Pakistan's economy can support a nuclear weapon's program, the Philippine economy can too. In fact, practically all of ASEAN 6 economies can. We don't see any reason why we should bother, and in fact lots of reasons why we should not, but it's not because we can't afford it.

Moving on to civilian nuclear power....

OPSSG said:
Can’t speak for Malaysia but it is likely to be a no for Singapore. There is little or no ambition to go nuclear in Singapore due to size constraints.

Surprisingly, google tells me that Malaysia has a Nuclear Agency (Agensi Nuklear Malaysia, ANM) but this is not a priority for its current government. Dr M said it had been the Malaysian government’s policy not to use nuclear plants to produce electricity. “That was the policy during my time as the 4th prime minister” but it was not (like that for) the 5th and 6th prime ministers. “But now I am back,” he said.

Japan and South Korea both operate civilian nuclear power plants. After Fukushima, the future of the nuclear industry in Japan is uncertain. In contrast, South Korea is among the world's most prominent nuclear energy countries, with 24 reactors and exports its technology widely. But President Moon Jae-in has promised to reduce South Korea’s dependence on nuclear energy, and has, since taking office, implemented measures to phase out this type of electricity generation. South Korea's oldest nuclear reactor Kori No.1 was permanently shut down in Jun 2017 after reaching the end of its 40-year-lifespan, the first South Korean nuclear power plants to be closed permanently. South Korea’s nuclear reactors supply about a third of the country's total electricity. During his campaign, Moon vowed to review plans to add new eight nuclear reactors, including the part-completed Shin Kori No.5 and Kori No.6. Moon said he will soon reach a consensus on the Shin Kori No.5 and Shin Kori No.6 reactors after fully considering their construction costs, safety and the potential costs of paying compensation.

Weaponisation is an incremental step that both Japan and South Korea, as latent nuclear powers, don’t need to take at the moment — as it is: (i) destabilising for NE Asia’s security dynamics that already has enough problems with North Korea’s antics; and (ii) not a vote winner for their domestic politics.
Click to expand...

Due to its size, there is insufficient renewable energy sources to power Singapore. Singapore's 2030 target for solar power is 4% of total electricity needs (not energy, just electricity). There's no river of significant size for hydropower. There's some wind available on-shore and off-shore but due to its place as a strategic port, there is a limit to how much offshore wind Singapore can place before they become navigational hazards. There is also no real source of geothermal power either.

Singapore can buy electricity from Indonesia and Malaysia. They can buy fossil fuel and stockpile it, but Singapore always try to reduce their dependency on outside resources. Nuclear power offers this. One load of nuclear fuel is good for 1-2 years (exactly how long will depend on the reactor type). But due to its size, Singapore can't afford a large buffer zone (the area that must be evacuated in case something goes wrong at the nuclear power plant). But fourth generation nuclear power can offer a much smaller buffer zone. NuScale's buffer zone for example is only as large as their plant site, meaning that if something goes wrong, only the plant itself needs to be evacuated. I think Singapore wants to wait until these gets built and they can see how much it actually cost and how it works in operation and have their own scientists look over the technical documentations to verify that the necessary buffer zone is indeed small before they go for it.

Anyway, the South Korea citizens themselves have decided to continue with Shin Kori 5 and 6. Construction has resumed and those plants are scheduled to be completed in 2023 and 2024 respectively. President Moon has indeed scrapped plants for any new nuclear power plants, but we'll see what happens after President Moon steps down from office in 2022 on whether his nuclear phase-out policy will be followed or reversed by his successor.

Re: What happens if the US nuclear umbrella no longer cover Australia and its region.

While the question was directed to StingrayOZ, let me add my two cents.

If the situation in the region gets dire enough that Australia feels the need for a nuclear umbrella on its own, it likely means that China has adopted a militarily aggressive posture, though maybe it hasn't actually invaded anyone yet. I can't think of any other situation that warrants such a policy. Well, alien invasion and kaiju from the Pacific Ocean I guess, but if those happens one certainly hopes we get to build humongous mecha rather than nukes. Anyway, an Australia that feels the need for nuclear weapons is an Australia that feels seriously threatened by China's nuclear weapons. But since Southeast Asia is way closer to China, it's likely that long before China feels the need to threaten Australia with nuclear weapons, it will be tempted to threaten one of the Southeast Asian countries with nuclear weapons.

The various Southeast Asian countries with a big enough economy to afford nuclear weapons (read: ASEAN 6) will then separately conclude that they had better get their own before it's too late.

I really hope we will never reach the day where Australia decides they need nuclear weapons, because if so Southeast Asia will already be in a dire situation.
Last edited: Nov 18, 2019

For Australia the key markets for growth are India, China, Japan, South Korea.

Australia would also have huge amount of say regarding nuclear proliferation, as our exports of uranium we could apply other clauses regarding extracting plutonium and processing. One of the more interesting proposals, is countries lease the uranium from Australia, we bring it back here and reprocess it. This basically takes nuclear proliferation issues away from dozens of countries.

The plan would be larger, because we would also bring the Canadians on board. Basically Canada and Australia wouldn't sell uranium to anyone, you could only lease the fuel from Australia or Canada. Any attempt to keep the fuel would be basically in violation of the NPT, so not only getting you black listed by the two biggest uranium producers, but basically instant sanctions. Russia has also expressed an interest in this kind of arrangement.

Australia has many options for nuclear influence other than just weapons.

Very interesting. Creates a safer world environment, Gives Australia and others more leverage and a long term sustainable industry. With all those points it is almost a certainty the Greenies and politicians will stuff it up. Way I see it nuclear power will be part of the world power mix for a long time and the waste has been an environmental and security risk for the last half century, If their is a way for us to help the issue especially if it is at a break even or better yet profitable way then we should be doing it.
You must log in or register to reply here.
Share:
Facebook Twitter Reddit Pinterest Tumblr WhatsApp Email Link
Top