At last some news about this project, the longest submarine ever made.
Btw, wasnt the name Project 09852? They talk here about 09853. 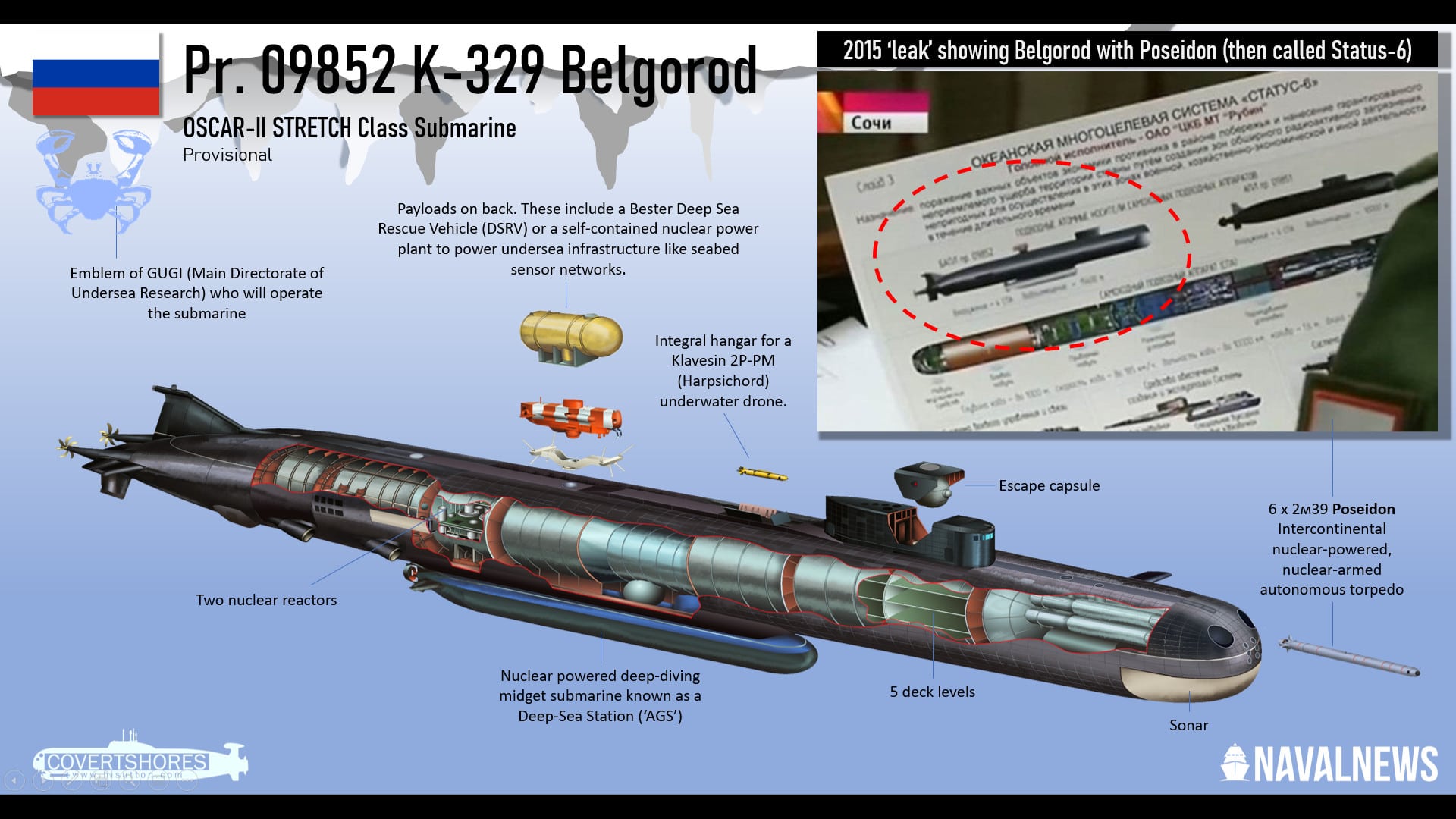 Belgorod will bring new capabilities to the Russian Navy. To be operated on behalf of the secretive Main Directorate of Undersea Research (GUGI), the submarine may be central to Russia's intelligence gathering capabilities. Yet she also carries a new strategic weapon, known as Poseidon.

Edit:
This seems to be the Big Boy, the one and only K-329 Belgorod. Photo from © CrazyMk

Edit 2:
Now also a video, with as a bonus two Project 941 boats on the background!

Interesting that this new submarine is to be based in the Pacific. Perhaps a message to another player besides the US?

John Fedup said:
Interesting that this new submarine is to be based in the Pacific. Perhaps a message to another player besides the US?
Click to expand...

Well it's not cast in stone that it's coming to the Pacific, but I do see the logic of it. There are a lot of cables criss crossing the Pacific that are just as valuable for Russian purposes as those in the Baltic, North Sea, Arctic, and Atlantic.

This report is from april this year, but i saw that no reports about the refurbishment and modernisation of the AS-31 Losharik were shared here.

So in March this year, specialists at the yard completed the task of extracting the deep-diving submarine’s nuclear reactor core.

Losharik is constructed from seven, spherical, titanium hulls. The front five hulls are interconnected, while the last two are paired up and hold AS-31’s nuclear reactor and machinery. According to TASS’s source, the deep-diving submarine’s titanium hull suffered practically no damages. The nuclear reactor itself, powering the submarine, will not be replaced and are ready to work with the new uranium fuel elements in place. 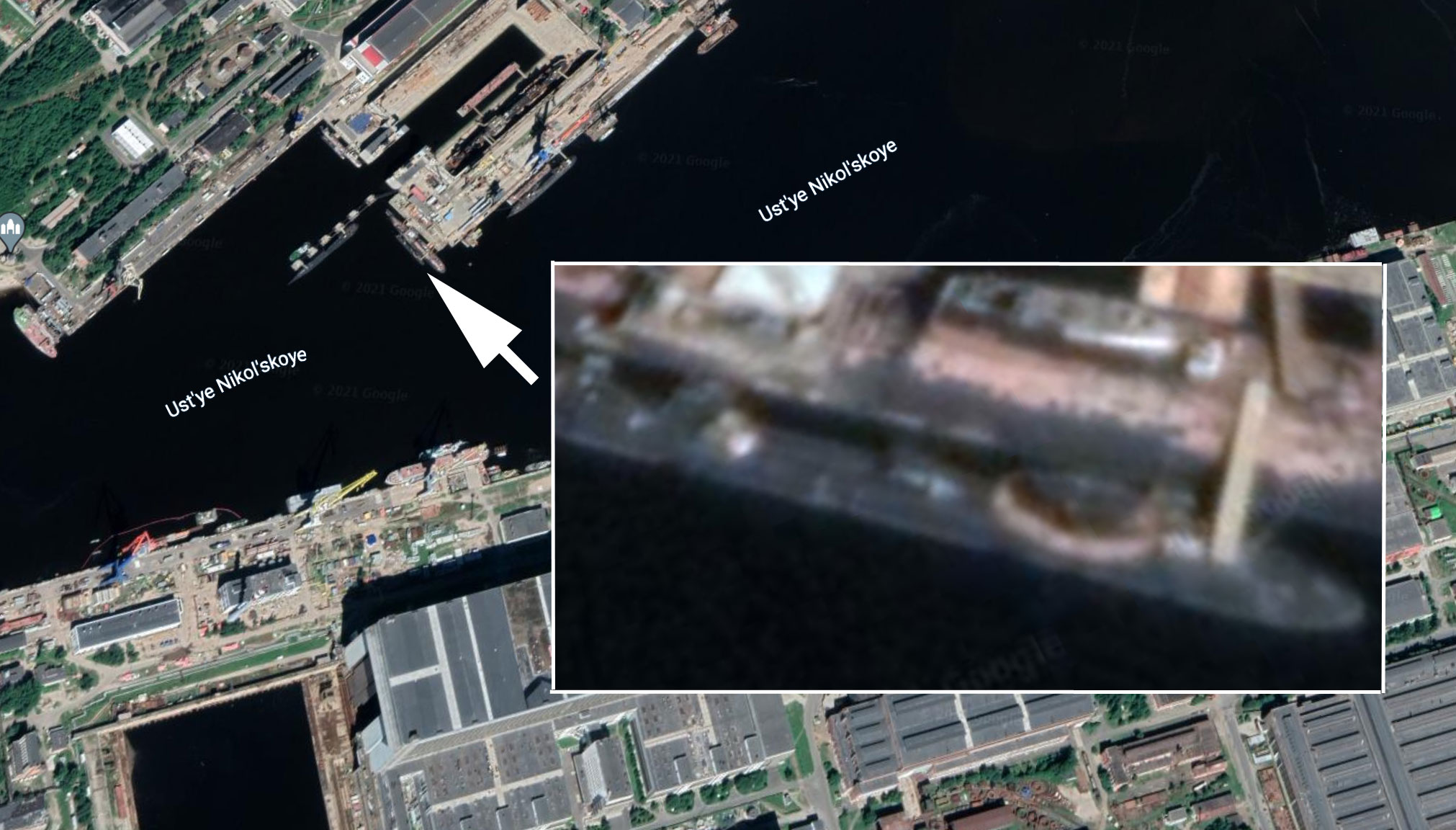 After long delays and one month of preparation, the spent nuclear fuel elements are now lifted out of the reactor, paving the way for modernization of the mysterious deep-diving spy-submarine at the yard in Severodvinsk.

The repairs and modernisation will take at least 4 years. The fire on the AS-31 military research submersible broke out in 2019, killing 14 submarine officers


The 10th Project 20380 corvette Rezkiy under construction for the Russian navy was rolled out from the slipway at the Amur Shipyard in Russia’s Far East and placed in the float-out dock for its transfer to the delivery base in several months’ time.

The corvette is set to be transferred to the delivery and acceptance base in Vladivostok in several months to complete its construction, carry out shipbuilders’ sea and state trials and deliver it to the Pacific Fleet.

And now a Project 885M Yasen-M update.
According to TASS, the Novosibirsk submarine went yesterday on 1 July to the While Sea for shipbuilders sea trials for the first time. It seems that the Project 885M is 9 meters shorter than the normal Project 885 and it also needs lesa crewmembers.

The Project 11711E large landing ship is designed for landing missions and transportations. According to USC, the ship has a full displacement of 6,600 t. The naval platform is 135 m long and 16.5 m wide, and has a draught (with full displacement) of 3.8 m. The ship’s board is 11 m high.
The Project 11711E ships features high landing capacities. The naval platform can accommodate 300 servicemen, up to 13 heavy vehicles, up to 20 medium vehicles, or up to 30 automotive vehicles.
Click to expand...

Remarkable. The dimensions of the Project 11711E is much larger, but all other data like displacement, load capacity, range, etc are exactly the same as from the normal 11711. I think the data given are just incorrect. 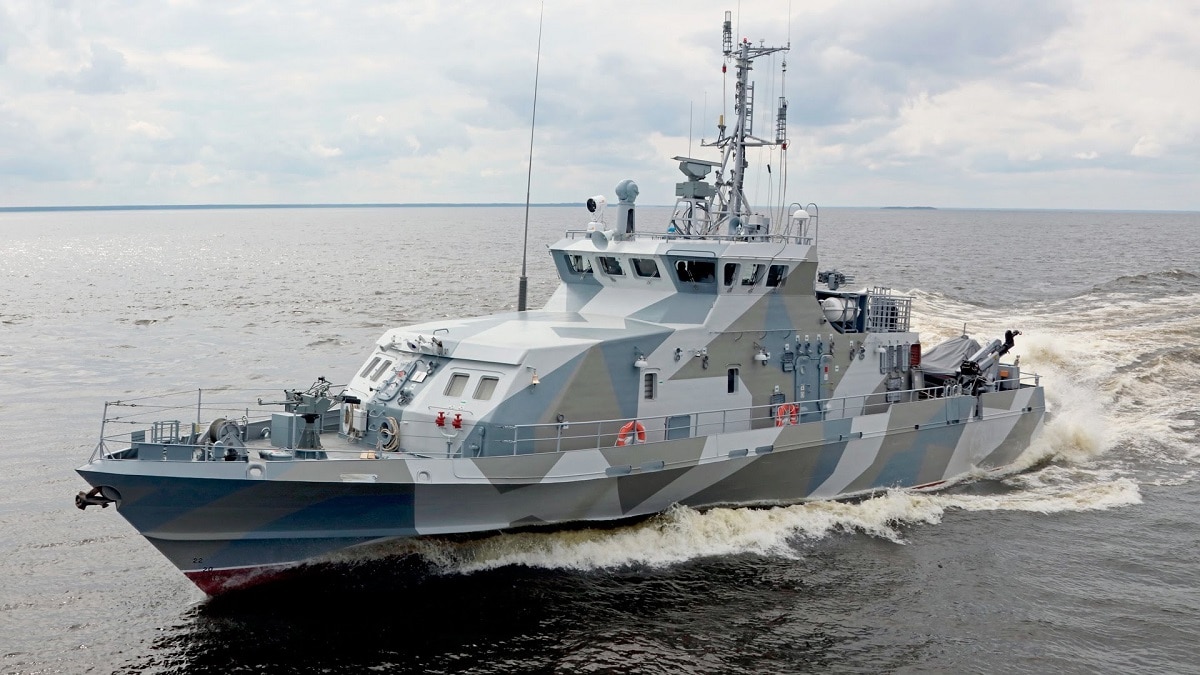 The Vympel Shipyard has laid down the keel of a Project 21980 (Grachonok-class) boat for the Russian Ministry of Defense (MoD), according to the press department of the enterprise.


Russia already has not received any naval ship orders from other countries for a couple of years. The last ones, like the 5th and 6t Gepard class frigates for Vietnam and the Project 20380/2 class corvettes for Algeria are all cancelled. So this relatively modern and low cost corvette can have a positive impuls on the Russian defence export.

The Northern Design Bureau (a subsidiary of the United Shipbuilding Corporation, USC) has designed an export-oriented 2,200-t missile corvette on the base of the Russian Navy’s Project 22160 patrol ship.

A nice comparison between the Project 885M Yasen-M and Virginia Block V classes.

Aspects such as sonar, sensors and stealth are hard to compare given the sensitive nature of these topics. Both submarines are believed to be extremely difficult to counter. The stand-off weapons however are a major component of the submarine’s punch, so this article is actually a comparison between the weaponloads of both classes. 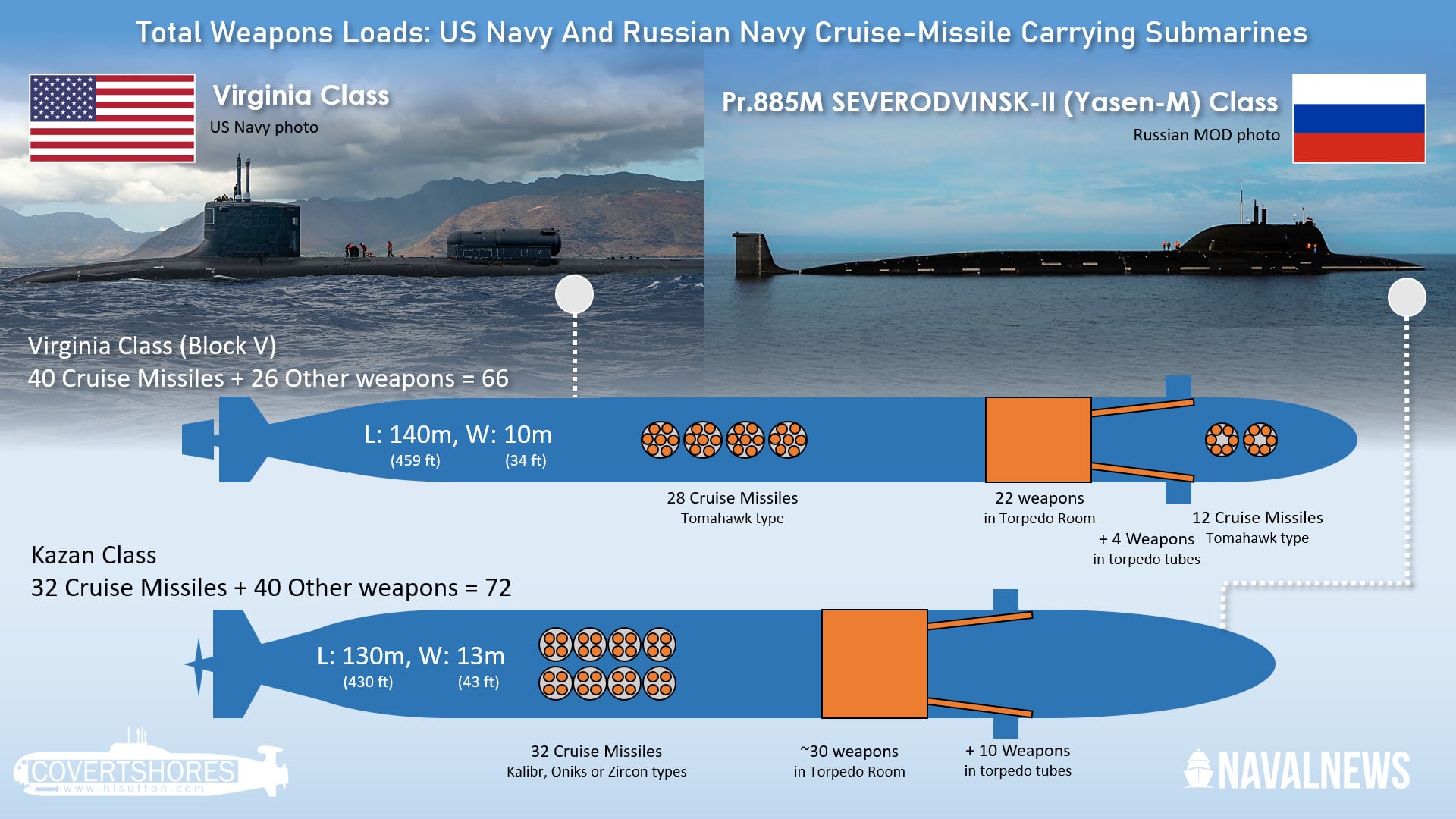 Russia is rapidly modernizing its cruise-missile submarine fleet. At the same time, the U.S. Navy is building larger and more capable versions of the Virginia Class which carry more missiles. How do the latest submarine classes compare in terms of weapons load?

The Project 11661 Gepard 3,9 design has become a little bit outdated and less attractive for the export market, so it is the right time to come with a more updated version. 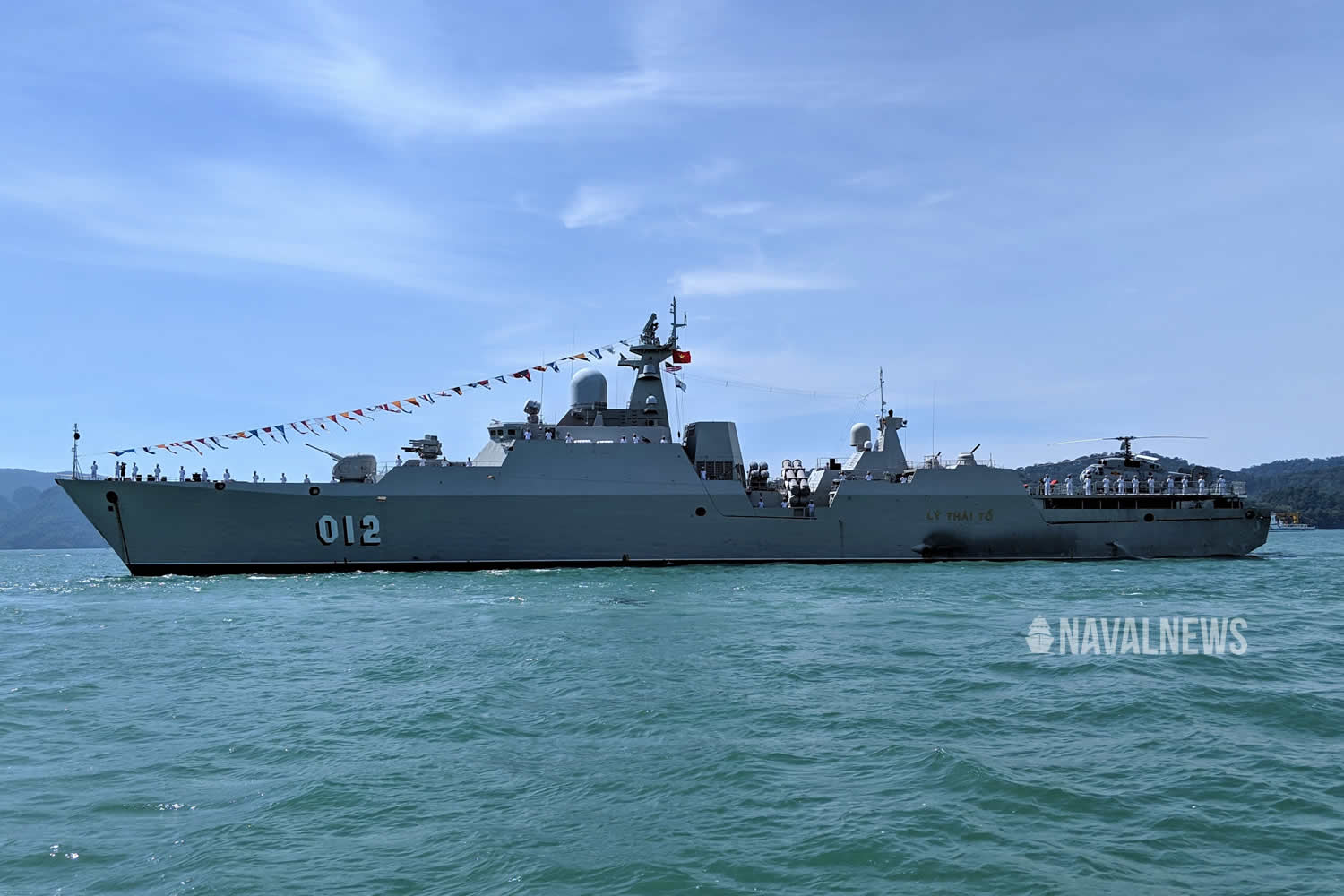 The keel of the 9th Project 12700 MCM-vessel has been laid. The construction of these Alexandrit minehunters goes much faster than in the beginning.
The Russian Navy plan to order 10 more. 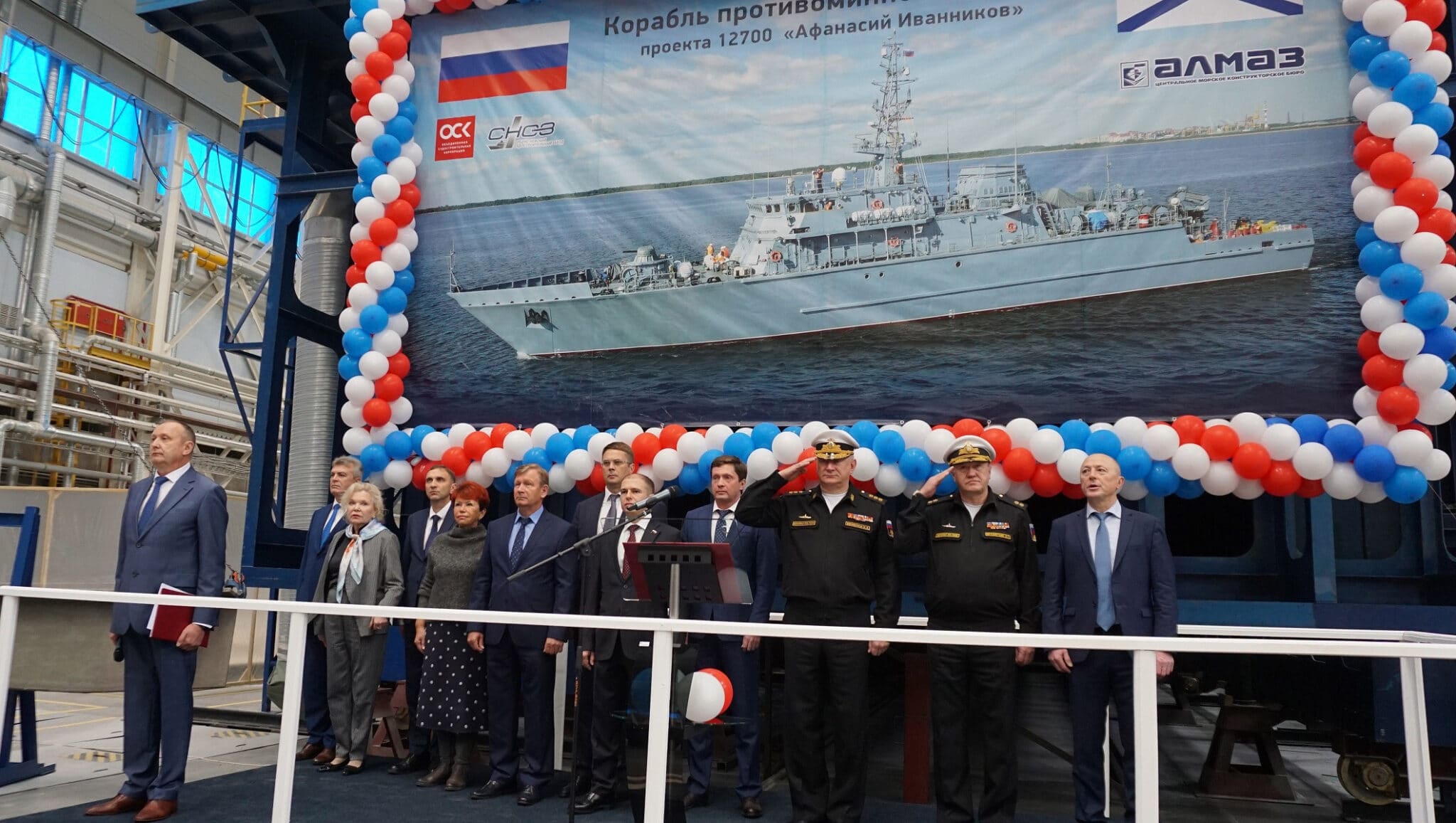 The ninth Alexandrit-class minesweeper of project 12700, 'Afanasy Ivannikov' was laid by Sredne-Nevsky Shipyard.

At last an update about the overhaul and modernisation of the third Project 1144 Orlan battlecruiser, Admiral Nakhimov. 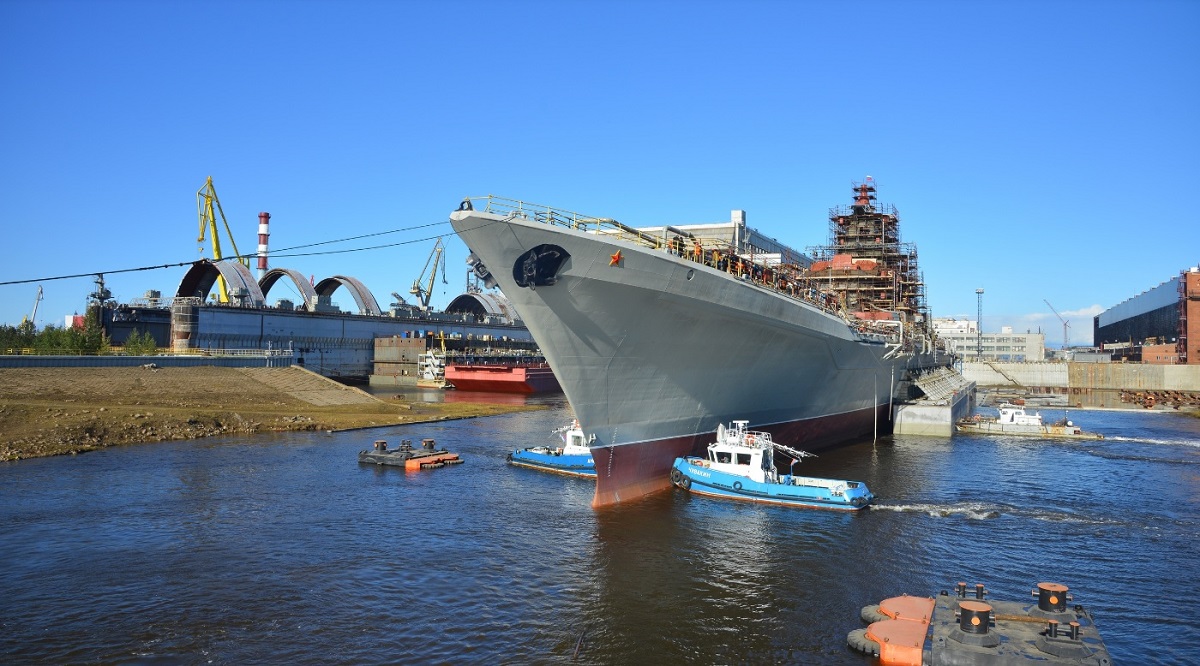 The Kirov-class nuclear powered cruiser (project 11442M) Admiral Nakhimov which is currently being repaired and upgraded by the Sevmash Shipyard will enter sea trials in 2023, Deputy CEO for Military Shipbuilding of the United Shipbuilding Corporation Vladimir Korolyov told TASS. 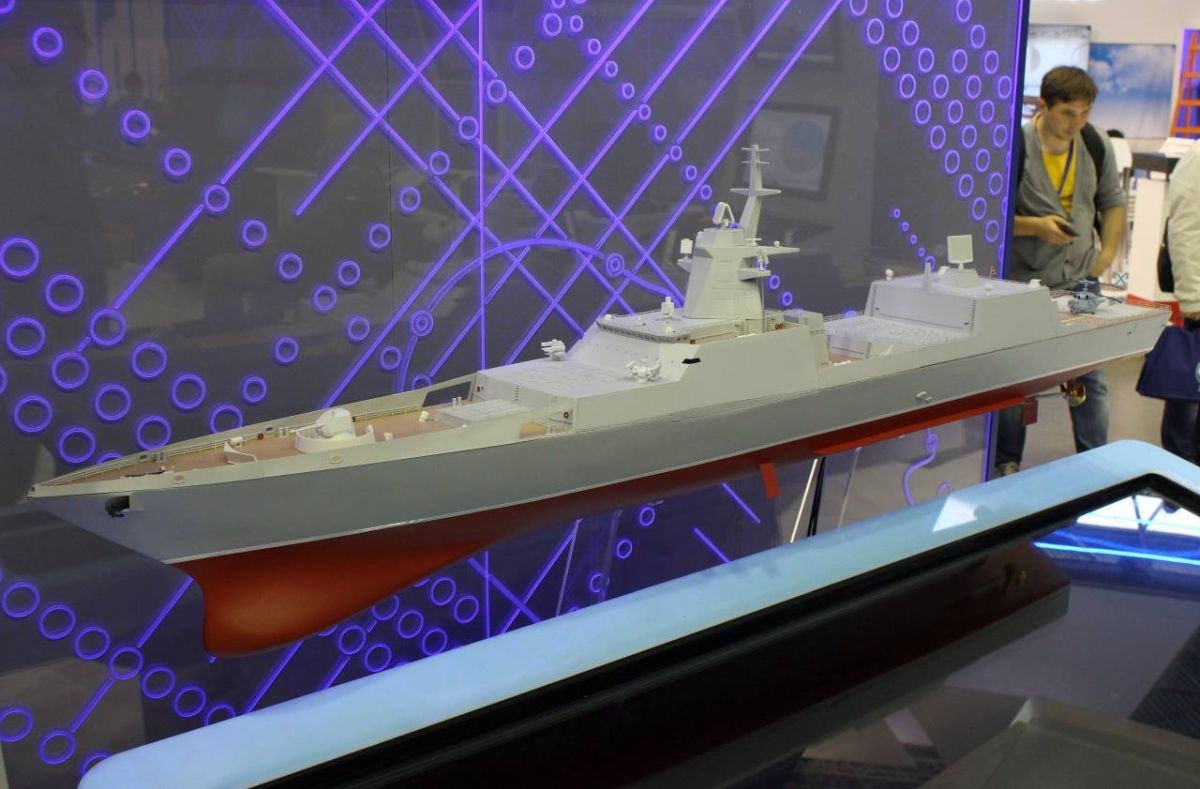 The upgraded Project 22350M lead frigate will be laid down in 2024, Deputy CEO for military shipbuilding of the United Shipbuilding Corporation (USC) Vladimir Korolyov told TASS.