Need assistance with some Russian patches

Was hoping someone is able to help identify these badges and translate what’s on them.

They are either Russian naval infantry or Spetsnaz.

The first is either a Home Ministry OMOH patch or Spetsnaz.

The 2nd and 3rd I’m guessing them to be VDV or Spetsnaz.

There are two types of Russian Navy (VMF) Spetsnaz and I have no idea which these are: (source Russian commando frogmen | Wikiwand Sorry, I'm not too fluent in Russian so Wiki it is)

Counteraction Underwater Diversionary Forces and Facilities (PDSS)
PDSS are special purpose (spetsnaz) unit of the Russian Naval Infantry, trained to conduct land and sea operations behind enemy lines, and to conduct underwater combat, mining and clearance diving. These units include combat swimmers tasked to protect ships and other fleet assets from enemy frogmen and foreign special forces. The precise composition, activities and location of the unit are strictly classified. 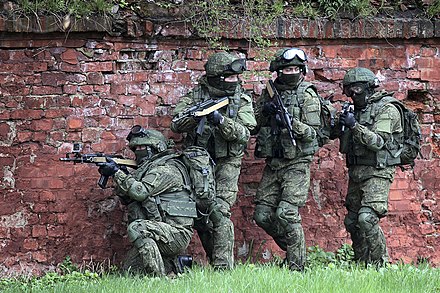 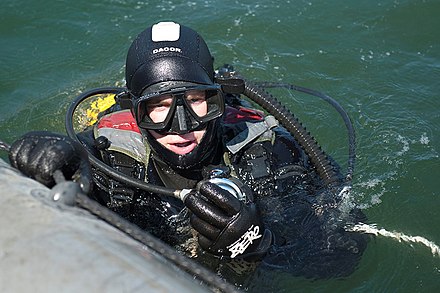 Thank you! Your help is very much appreciated
.
Most of these badges were acquired in the mid 1990’s and I’ve long been unable to ID them

2. Tiger. I’ve been told this is from a ONOH unit in the.Far East region.

3. Fire breathing horse with a crossbow below.

4. Naval aviation possibly? Wings with an anchor and crossed bayonets.

This patch is an odd one. Most Russian military patches are rubberised or embroidered but this is made of plastic/vinyl. Because of the polar bear it’s definitely Northern Fleet but is a unit or a sub?

The one with the mountains is possibly a Caucasus based unit or command.

“ It has Palats (palace) in the scroll”

yes-ish, the 2 characters that look like an English n are the Cyrillic p and l (l looks like the p but with a little leading curve. Cheers. I am babysitting and will look at the others when I get home. 6 is naval infantry
Last edited: Nov 1, 2020

I have a look see if I can track down the others tomorrow.

SKR (CKP not sure but a spelling of destroyer starts with R) Resourceful/quick-witted (сметливый=smetlivii)​
​
4. Can't find any patch resembling this (the crossed swords or bayonets are missing). But probably Naval Aviation.

I can’t thank you enough. Much appreciated!

Sturm, Actually I'm a neophyte in Russian (but google supplements my mediocre skills), have a moderate interest in Russian history and worked with a Russian recently and we both could have been trying to kill each other in the early 1980's if things had gone to pot, but fortunately they didn't and we got along well. Just having a little fun finding out about the patches.

3. Special Forces (Войска Специального Назначениня=Voiska Specialnogo Naznachyeninya). All military Spetsnaz ... as opposed to Police etc, I think. GRU? Some are in GRU.

5. Ministry of Internal Affairs of the Russian Federation (Министерство внутренних дел, МВД, Ministerstvo Vnutrennikh Del, MVD). Ministry of Internal Affairs (Russia) - Wikipedia. On 5 April 2016 Russian President Vladimir Putin ordered the Internal Troops, OMON (the Special Purpose Mobility Unit), and SOBR (SWAT) forces to form the basis of the new National Guard of Russia, and these moved from MVD control and were reassigned to the Security Council of Russia. In turn and on the same day, the Federal Drug Control Service and the Federal Migration Service merged into the MVD and is now known as the Main Directorate for Drugs Control and the Main Directorate for Migration Affairs, respectively. So not as sexy nowadays!

Also updates to
How many more unidentified patches have you got?
Last edited: Nov 2, 2020
S

That’s about it. Thank you. I really appreciate the help/effort you put into it.

I have a 1st gen 1960’s/1970’s NVG with an instruction booklet which I’m trying to ID though If you’re interested in having a look I could post some pics.

On the Black panther patch I’m pretty sure it’s Russian. Got it from the same source many years ago and it made using the same rubberised material. The problem I suspect is quite a few of the patches were variations made in small numbers; units which don’t exist anymore.

STURM said:
That’s about it. Thank you. I really appreciate the help/effort you put into it.

I have a 1st gen 1960’s/1970’s NVG with an instruction booklet which I’m trying to ID though If you’re interested in having a look I could post some pics.

On the Black panther patch I’m pretty sure it’s Russian. Got it from the same source many years ago and it made using the same rubberised material. The problem I suspect is quite a few of the patches were variations made in small numbers of units which don’t exist anymore.

Sturm,
Not a problem helping you. It was fun.
1st gen 1960’s/1970’s NVG with an instruction booklet I am not really that interested in kit.
Do you collect insignia/patches? No I don't collect any militaria, other than a little small scale modelling/wargaming. I hike/bushwalk, photograph nature, visit historical sites (Covid has killed this), sing in a choir (Covid has also killed this), babysit grandchildren and visit family and friends. I have family in Winnipeg (currently in lockdown), Victoria (coming out of lockdown), Queensland (gradually letting persons from other States and Terrritories enter) and Canberra (coffee shops R Us!). I once was a Reservist and my youngest son is currenly an active Reservist. I retain an interest in the Australian Defence Force and world current affairs.