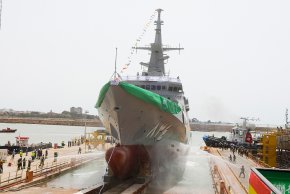 Navantia has launched today (July 24) the fourth of the five Avante 2200 corvettes being built for the Royal Saudi Naval Forces (RSNF), named “Jazan”.

The ceremony was held at the San Fernando shipyard. It was attended by the Commander of the Royal Saudi Navy, Vice Admiral Fahad Bin Abdullah Al-Ghofaily; the Chief of Staff of the Spanish Navy Admiral General Antonio Martorell Lacave; the president of the State Industrial Participation Society (SEPI), Belén Gualda; the president of Navantia, Ricardo Domínguez; the Vice President of Saudi Arabia Military Industries (SAMI), Wael Alsarhan and other officials.

Jazan 834
Jazan is the fourth of five corvettes which has been constructed within the project of Sarawat of Saudi Arabia.

The Jazan has a length of 104 meters, a beam of 14 meters, and will be able to accommodate 102 people (crew and additional personnel). It will reach a maximum speed of 27 knots and, among other aspects, it has the capacity to carry 21 days’ supplies on board.

The design of the corvettes is of the latest generation, maximizing the participation of Navantia by incorporating its own products, such as the CATIZ Combat System, the HERMESYS Integrated Communications System, the DORNA Firing Direction, the Integrated Platform Control System and the MINERVA Integrated Bridge, together with other equipment developed by Navantia under license, such as the MTU Engines or the RENK Reduction Gearboxes.

Welcome to the Forum Sea Eagle.

You should probably be aware that if this is an extract from a press release or a publication the Forum mods require a reference to the source. They also get a bit touchy when such things are posted without some original comment by the poster.

You should probably be aware that if this is an extract from a press release or a publication the Forum mods require a reference to the source. They also get a bit touchy when such things are posted without some original comment by the poster.
Click to expand...

Additionally, this is the sort of thing that should probably be posted in the gaining service/fleet's existing thread. Or the General Maritime News & Discussion thread
S

G'day @Sea Eagle yep we do get touchy as @spoz has said about requiring posters to add value to posts. By that I mean we like you to add your thoughts about what it is you have linked to. With regard to sources, our requirements are that material be sourced so that you and the forum cannot be accused of plagiarism. Html links generally are acceptable, however if no such links is available then the author, year of publication, article / book title, journal / publisher, if journal / magazine article the volumeand issue numbers. The rules explain our expectations. We look forward to your contributions to the ongoing discussions.
You must log in or register to reply here.
Share:
Facebook Twitter Reddit Pinterest Tumblr WhatsApp Email Link
Top