Can anyone help explain what this piece of equipment is for and what it's called? I assume it's metal/aluminium matting used on soft or uneven ground?

I know it's asking too much but if possible; can anyone ID the model of the Mercedes lorry :] ?

STURM said:
Can anyone help explain what this piece of equipment is for and what it's called? I assume it's metal/aluminium matting used on soft or uneven ground?

I know it's asking too much but if possible; can anyone ID the model of the Mercedes lorry :] ?

1. It is called FAUN Trackway. This is an aluminium ground mobility system used by bridging engineers that is usually rated by MLC 30 or even up to MLC 70, to prevent vehicles from sinking in soft soil or sand — most often used before or after a bridge to span a wet gap or at a beachhead. See: Faun Class 30 Trackway with Ulrich Beach Dispenser - Think Defence

Thank you. That was very helpful.

Yes it's a Arocs 8x8 with a trailer. Until I saw the pic I had no idea it was even operated.

STURM said:
There is a coaxial MG. On the pic on the right, the port is visible. My only gripe with it is the size of the turret. It looks too large to be on the hull. Another question is why a 30mm when targets are intended to be engaged with the missile from a distance.

Another variant has just the 30mm and coax but no ATGWs.
Click to expand...

The concern of the turret size usually comes from its profile but more importantly, its CG. As high CG effects its stability and mobility. Based on the picture, IMO, it looks fine but heard that due to the weight of the turret, 30mm turret variants has limited or no amphibious capability.

An AFV can be put on various roles like assault, fire support or anti-amour, and configured accordingly. 30mm beside used for anti-light armour, it is also commonly use for anti-personnel and anti-bunker. As it is not cost effective to take out non armored target with ATGM, hence 30mm still has its role. Hope this helps.
S

Seen in one of the pics is a Namo
LAW which was first acquired a few years ago; although this is the first time pics of it at an exercise have appeared. The army recently ordered a number of MBT LAWs/NLAWs.

The first trials of the Nexter LG1 were recently conducted. These were ordered to replace 10 Para Brigade’s Model 56s.

Staff member
Thanks for the update — I have a lot of respect from the professional approach of the MAF military leadership; I hope that FPDA ties will continue to moderate tensions or limit the scope of escalation should a period of troubled peace re-occur, due to decisions of certain politicians.

Being neighbours means there will be tensions at times but if we keep the bigger geo-political picture and competition of the superpowers in mind, there will still be scope for bilateral cooperation at a military-to-military level for the MAF and the SAF.

In 2021, the Chinese Coastguard is willing to fire warning shots, by 2031, they will be willing to fire at Malaysian ships. Malaysian politicians better think carefully about the nature of their relationships with immediate neighbours, with more modern military assets, in the decade ahead — who may or may not be willing to help should the need arise.

STURM said:
The first trials of the Nexter LG1 were recently conducted. These were ordered to replace 10 Para Brigade’s Model 56s.
Click to expand...

The on-going artillery modernisation of the Malaysian Army’s 1st Royal Artillery Regiment will ensure accurate and timely fire support. This will make any attempt at Lahad Datu 2.0 not attractive to the men of Jamalul Kiram III's faction. The BACARA compact portable ballistic computer (for use at battery level) supplied with the LG1 Mk III Light Guns will speed-up fire support. The more accurate the fire support, the less ammo you need to expend, reducing the logistics tail.

If that unlikely event of a repeat Sabah intrusion occurs, I believe that it is probable that both Australia and Singapore stand ready to provide ISR, naval logistics and heli-lift support to the MAF, in solidarity with your country, as Dr Ng said in 2013. The goal is to offer relevant capability gap coverage that your country may want.
Last edited: Mar 11, 2021
S

Indeed. The FPDA has a very important role to play; a fact Malaysia fully recognises and appreciates.

It’s noteworthy the country Malaysia exercises with more regularly and extensively than with any other is the U.S. There is CARAT, SEACAT, Cope Taufan, Balance Mint, Teak Mint and Kris Sakti; as well as a host of exchanges; including the “Airman Talks” held annually. In 2014 the U.S. deployed F-22s for the first tine in a regional exercise; Cope Taufan.

As you’re aware Malaysia has also been the beneficiary of U.S. funded ScanEagjes, a long range radar and sensor mission suites for 3 CN-235s. This is on top of several U.S. funded coastal radars many years back; in Sabah.

After the U.S. the country Malaysia has the most military exchanges/exercises with is Australia. The only permanent military facility Australia has on foreign soil is in Malaysia - a mutually beneficial arrangement. Both U.S. and Australian officers are regular attendees at the Malaysian Staff College, the Defence University and the Peacekeeping Centre. Like the case with the U.S; grants provided by Australia enable Malaysian officers to attend various courses in Australia. There is also a ADF liaison officer attached to the Malaysian Ministry of Defence.
Last edited: Mar 12, 2021
S

OPSSG said:
If that unlikely event of a repeat Sabah intrusion occurs, I believe that it is probable that both Australia and Singapore stand ready to provide ISR, naval logistics and heli-lift support to the MAF, in solidarity with your country
Click to expand...

I don’t doubt it.

Malaysia has put in a lot of effort and resources into Sabah to deal with the non state threat; including significantly raising troop levels and beefing up surveillance capabilities. This is in contrast to the past when there was only a minimal presence.

As you said a repeat of 2013 is unlikely but non state actors (not necessarily the Kirams) might resort to different means. The good news is that for them; a repeat of 2013 is much harder now given the much increased MAF presence in the area. The bad news for the MAF is that a lot of focus and resources have been diverted to ESSCOM at the expense of some other areas.
Last edited: Mar 12, 2021

Not many newsreports are on the internet about the acquisition of the 6 MD-530G by Malaysia.

Malaysia ordered the MD 530Gs in early 2016 under a contract estimated to be worth $76.4 million. Based on the procurement contract, all the helicopters are expected to be delivered to Malaysia at the end of this year. 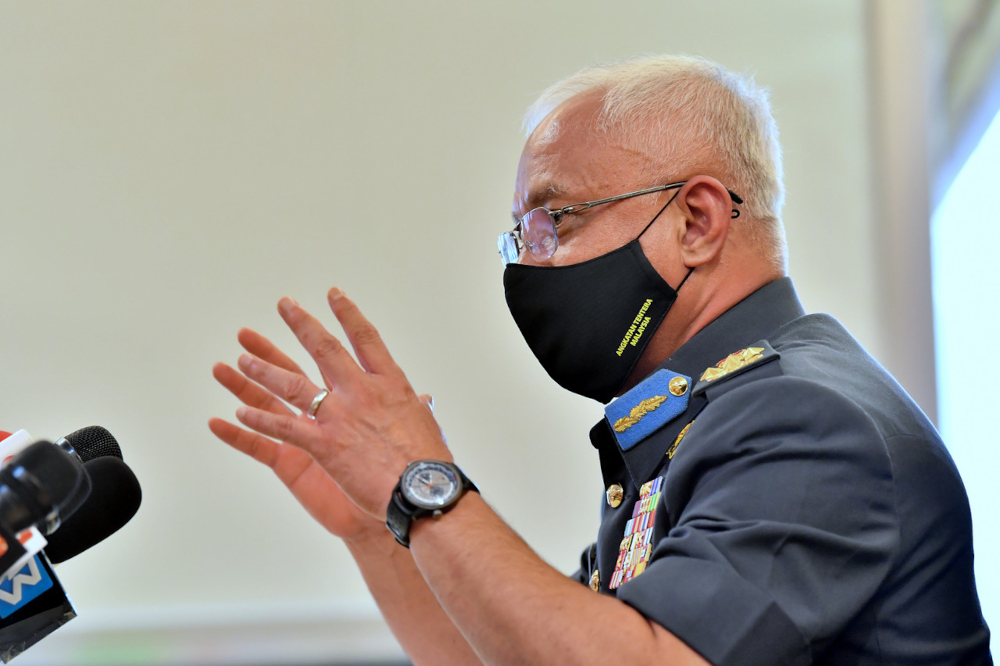 Like a number of other programmes the Little Birds have a long and convoluted story behind it. They were ordered by the Barisan government but the local company selected to handle the deal had to be replaced by another company. The Pakatan government which came to power in 2018 looked at cancelling the deal but eventually stayed the course, a decision which was reaffirmed by the Perikatan government which took power last year.

The largest procurement deals scheduled for the next couple of years are 250 6x6 IFVs and a regiment's worth of 18 wheeled 155mm SPHs. Tenders are expected soon.

One area in which the army has been making quiet but steady progress is its network centric capabilities. From issued tenders we know that orders have been placed for RPG launchers from Serbia, RPG rounds from Romania, Barretts from the U.S. and 81mm mortars and associated fire control from Spain. A tender has also been released for 1,500 anti structure munitions [ASM] for which the Nammo M-72 [already operated] is a leading contender. Another tender going out is for 20,000 "enviromentally friendly" traning hand grenades.
S

This is not about the Malaysian army per see because there was no Malaysia prior to 1963 but nonetheless this unit later became the largest infantry Regiment in the Malaysian army. It fought during the Emergency [when Malaya was still a colony] and later during the Confrontation and the 2nd Emergency. The article below first appeared in The Pointer [The SAF's journal] and is about the Battle of Opium Hill, a little known encounter during the fight for Singapore.

These images of the Malay Regiment were taken by Life magazine prior to the Japanese invasion.

It's in Malay and there're hardly any subtitles but this video has great footage on the 10 Para Brigade.


Footage of a HALO/HAHO exercise conducted by the Gerak Khas Regiment.

A plan by the army to obtain additional Metis rounds [first ordered in 2002] and also additional launchers has been vetoed by the government. According to reports a non Russian system is desired and the favourure is Roketsan's UMTAS. Since the retirement of Eryx [first acquired for use in Bosnia when there were fears that things would get hot and Bosnian Serb MBTs would pose a threat] ; Metis [on tripods and softskins and the recently ordered MBT LAW are the only infantry operated ATGW in service.

Other ATGWs in service include the IFV mounted Bakhtar Shikan [a copy of the Red Arrow which in turn is a copy of TOW 1] and beam riding Ingwe [turret mounted in a a pair of 2 round launchers [unlike Bakthar Shikan which is pedestal mounted].

Shoulder launched weapons with some level of anti armour capability include the Carl.Gustav [an early variant] operated by Support Companies], section level operated RPG-7s which were originally sourced from Pakistan [ammo has since been sourced from Romania] but recently supplemented with ones from Serbia and the Nammo
M-72 [the anti structure variant is also operated]. For a number of years the Instalanza C-90 was operated. Details are murky on a tender placed for about 130 latest generation Carl Gustavs. Some years ago there was also a report about RPG-7 rounds sourced from Ruag but details are still murky and it has yet to be publically seen.