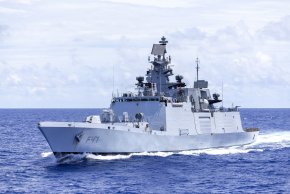 https://www.navalnews.com/naval-new...competing-for-the-indian-navys-p-75i-program/
India has announced the 4 contenders for the P-75I program
Barracuda DE(based on the Attack design) from France
DSME-3000 from ROK
S-80 plus from Spain
Amur class from Russia
Will be interesting to see what France includes in the Barracuda DE, the Picture is showing a Pump Jet, not that really means anything.

Redlands18 said:
Will be interesting to see what France includes in the Barracuda DE, the Picture is showing a Pump Jet, not that really means anything.
Click to expand...

Interesting they (Frenchie) seems on surface basically going to offer similar program with Australia to India. Indian online and forums however very sure that with what happens to Frenchie - Aussies deal fall out due to AUKUS, Frenchie will help integrating Indian Nuclear Reactor to Baracuda based Submarine instead.

They're claiming that there're now discussion with Indian for using French tech to improve Indian home grown Nuclear Reactor if India choose Barakuda based Submarine. Off course it's all just Indian online 'rumours' for this time around. However it's getting stronger, and based on what happens with AUKUS development, perhaps it can't be ruled out entirely.