https://twitter.com/i/web/status/1480455541205856256
1. In 2022, the RSAF has started taking delivery of 1st two of 16 the CH-47Fs in Singapore (following its initial delivery to the RSAF Helicopter Detachment in Oakey, Australia). 11 are to be based in Sembawang Air Base, with 5 based in Oakey, Australia — the CH-47Fs are sold under a Direct Commercial Sales contract with Boeing to replace the RSAF’s fleet of older D/SD series of Chinooks.

​
(a) These CH-47Fs are powered by two Honeywell T55-GA-714A engines, with a Time Between Overhaul of 3,000 hours. When compared to the engines on CH-47Ds to be retired, these new engines provide a 22% increase in power, a 7% reduction in Specific Fuel Consumption, while enabling a 25% reduction in operation and support costs.​
​
(b) The CH-47F, as the world’s fastest military helicopter, can fly at up to 175 knots, with a range of 609 km (329 nautical miles), and can fly as high as 20,000 feet. The survivability upgrades also include rectangular-shaped radar warning receivers, a product of Elbit Systems — who provided the onboard defensive suite.​
2. The SATCOM antenna on the top of the CH-47F fuselage and select H225Ms— facilitate comms on HADR and other missions from a sea base.

3. In other news, the USAF will hold the second of 2 online public scoping meetings in Feb 2022 to discuss the proposal to place a permanent Foreign Military Sales Pilot Training Center at Ebbing Air National Guard Base in Fort Smith, as well as answer questions and hear feedback from the public. Ebbing was selected in 2021 as the USAF's preferred location for a pilot training center for Singapore and other countries participating in the Foreign Military Sales program. The proposal would accommodate up to 24 foreign F-35s and move 12 F-16s from the Singapore air force, currently at the Luke Air Force Base.
Last edited: May 22, 2022


“Our F-16C/Ds fleet of fighter aircraft is being upgraded in phases, and we have commenced initial deliveries of the upgraded F-16 in June 2021… Subsequent deliveries will be rolled out progressively to ensure that the RSAF continues to have a capable fleet of fighter aircraft to meet our defence requirements. We will continue to operate these fighter aircraft for at least another decade and are working towards replacing the F-16s at the end of their operational life,” he added.​
5. Shepard News reported that Boeing has signed agreements with the DSTA in Singapore to create a data exchange pipeline to enable collaborative data analysis for RSAF F-15SGs.


“The data exchange pipeline will store and facilitate the analysis of supply chain data for the F-15SG aircraft fleet, with the goal of developing predictive maintenance actions that will enhance the operational readiness of the Republic of Singapore Air Force,” Boeing announced in a 15 Feb 2022 statement.​
Last edited: Feb 20, 2022

1. Speaking on 8 Mar 2022 at a town hall in Fort Smith, Col. Rob Ator, USAF (Ret.), and Arkansas Economic Development Commission director of Military Affairs, said the pilot training center at Ebbing National Guard Air Base in Fort Smith that is part of the federal Foreign Military Sales program should be confirmed in April 2023. 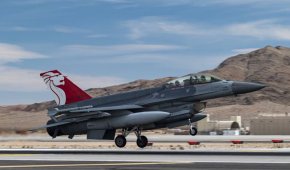 3. Meanwhile 9 F-16s from the 425th Fighter Squadron will be participate in Exercise Red Flag 22-2 – Nellis, held from 7 to 18 Mar 2022 (US time). The exercise will include 14 units with approximately 1,750 personnel from the USAF, US Marine Corps, US Navy and Air National Guard, Royal Saudi Air Force and Republic of Singapore Air Force (RSAF).

​
(a) The primary focus is on combat missions, mission commander upgrades and flag-unique experiences for the 55 aircraft involved in the large-scale air combat exercise.​
​
(b) Red Flag 22-2 will concentrate on three primary themes to include defensive, offensive, and counter-air techniques. The RSAF has been participating in Exercise Red Flag – Nellis since 1982.​
​
(c) By way of background, Singapore operates 3 fighter squadrons of F-16s, that will be progressively replaced by F-35s. The US has approved the sale of 4 (with 8 on option). The 1st 4 F-35Bs will be delivered in 2026 to the 425th Fighter Squadron, who will operate both types of fighters.​
Last edited: Sep 1, 2022
K

Given that MinDef recently shared that the Fokker 50 MPA would be replaced, there is a strong likelihood that Singapore is the receipient for this order.

IAI will manufacture a long-range MPA for an unnamed Asia-Pacific customer.
www.shephardmedia.com

koxinga said:
Given that MinDef recently shared that the Fokker 50 MPA would be replaced, there is a strong likelihood that Singapore is the receipient for this order.
Click to expand...

Thanks for the heads up.

Staff member
2 Singaporean Chinook helicopters were deployed from its Queensland base to assist the Australian Defence Force (ADF), the Singapore government said in a statement. The helicopters commenced operations on 7 Mar 2022 and are transporting personnel and emergency supplies, to provide relief to civilians affected by the floods in Queensland and New South Wales (NSW).

https://twitter.com/i/web/status/1503252622572408833
The ADF had also accepted offers of relief packages from Singapore’s armed forces that includes tents, blankets, ready-to-eat meals, water and medical supplies. The package departed from Singapore via an RSAF C-130H and an RSAF A330 MRTT.


https://twitter.com/i/web/status/1506541657788862468
The RSAF conducts large force employment training in Thailand (Cope Tiger), Malaysia (FPDA’s Bersama Shield) and the US (Red Flag 22-2) in the month of Mar 2022. The Ground-Based Air Defence assets, deployed to Thailand include the Multi-Mission Radar (MMR), were also deployed during the exercise. 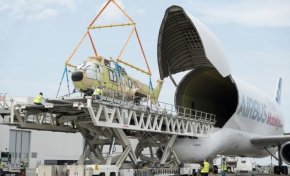 2. The five bladed H225M is powered by 2 Turbomeca Makila 2A1 turboshaft engines. The Turbomeca Makila 2A1 turboshaft engine has a Time Between Overhaul of up to 4,000 hours, and a 14% increase in power. This enables Singapore’s H225Ms to fly at over 170 knots for overwater SAR, and enables the instructor community of the helicopter to fly and teach pilots to fly conventional missions and special operations forces support missions.

3. Be it for HADR or SAR missions, the H225Ms activated from Singapore or a lily pad (off a navy ship), will help Singapore better position itself in a world is facing increasingly complex problems. Singapore can add its voice to a list of countries standing up for the rules based order and work together with other like minded militaries in the region despite differing interests.
Last edited: Sep 28, 2022

4. Congratulations to Gen. Charles Q Brown Jr, who was conferred Singapore's prestigious military award, Meritorious Service Medal (Military). Minister for Defence Dr Ng Eng Hen presented the award to GEN Brown at an investiture — well deserved, given that the USAF hosts the 425th Fighter Squadron (F-16Vs at Luke) and the 428th Fighter Squadron (F-15SGs at Mountain Home). The Republic of Singapore Air Force (RSAF) training detachment for F-16Vs will be moved to Ebbing Air National Guard Base (from Luke, starting in 2023); and the RSAF will also collocate the F-35B training detachment there starting in 2026.


https://twitter.com/i/web/status/1556901258342019073
6. In common with the RSAF, the Americans, the Australians, the Japanese and the Koreans start with the assumption their air bases will be hit, intermittently, from day 1 of war. Therefore, damage recovery capabilities become important.
Last edited: Sep 28, 2022

There is discussion that Singapore may now also consider another f35 variant in addition to the f35b
Singapore reveals it might choose a different F-35 variant (defensenews.com) 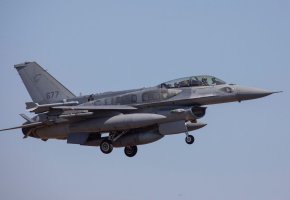 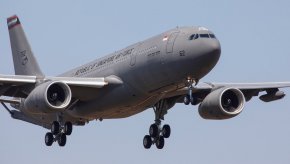 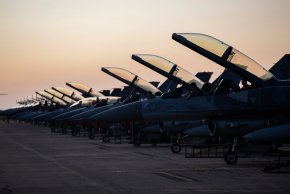 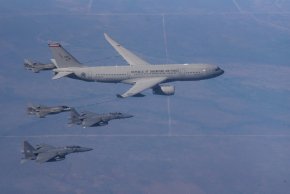 Staff member
https://twitter.com/i/web/status/1569985290588270595
1. A RSAF C-130H at Rockhampton Airport for Ex Wallaby 2022. Ironically, this highlights the lack of strategic airlift by the RSAF to move its own assets for an overseas exercise.

OPSSG said:
as the RSAF is not willing to use Antonov to transport its helicopters for Ex Wallaby 2022.
Click to expand...

Hi OPSSG, I believe the only An-225 was destroyed in the Battle of Antonov Airport during the 2022 Russian invasion of Ukraine.

Lone Ranger said:
Hi OPSSG, I believe the only An-225 was destroyed in the Battle of Antonov Airport during the 2022 Russian invasion of Ukraine.
Click to expand...

Thanks for pointing this out.

My apologies for the confusion & carelessness in the earlier description — should have said “the RSAF is not willing or able to use Volga-Dnepr owned Antonov An-124s”, which is one of the Russian owned aircraft chartered by the RSAF in the past. Above post edited, to reflect new text.

https://twitter.com/i/web/status/1174428956444917760
I suspect the An-124s of Ruslan Antonov Airlines belonging to Ukraine are quite busy shipping American and Australian arms to Ukraine this year.

11. This is not the 1st fighter scramble for a bomb threat — this has occurred in the past on: